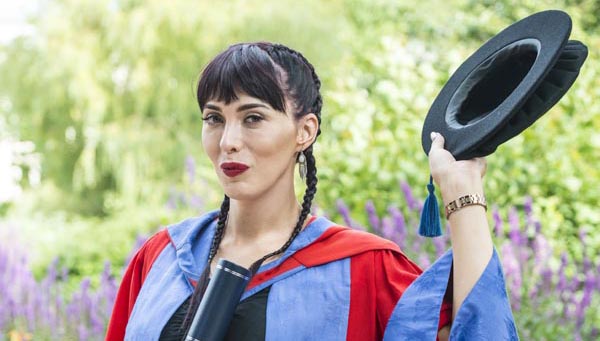 Paris Lees, the prize-winning journalist, presenter and equality campaigner has been awarded the honorary degree of Doctor of Letters in recognition of her major contribution to the understanding of trans-identity in contemporary society as a journalist and cultural commentator.

Paris received her honorary degree during the University’s summer graduation ceremony at the Brighton Dome on July 25, presented by Professor Debra Humphris, Vice-Chancellor of the University.

Speaking to graduates at the awards ceremony, Paris Lees said: “I am deeply grateful to everyone at the University and in particular the Vice-Chancellor, Professor Debra Humphris. Up until very recently trans people weren’t celebrated for anything – we were simply objects of ridicule, or data points in academic debates.

“Family. Love. Prestige. These are things traditionally denied to trans people. I want people from the margins of society to know that it is possible to have these things.

“I feel compelled to dedicate this honorary doctorate to a group people who seldom enjoy public praise – sex workers. Sex work is part of my past now, but the truth is I would not have got my degree and forged the career I enjoy today without making some tough choices.

“Making sex work criminal does not stop it from happening and only puts sex workers in danger. Too many middle class commentators in broadsheet newspapers continue to ignore the voices of sex workers and call for a ban on sex work. This has to stop. Sex workers, like trans people, are one of the most silenced groups in society. We do not hear their voices. I want them to know that they are valuable, that they are not wrong, or dirty, and that I care about them.”

Paris Lees was described as “the voice of a generation” by i-D magazine. Her work can be found everywhere from the Daily Telegraph to the Guardian and she is the first and, so far, only trans person to appear on the BBC’s flagship discussion programme Question Time.

She is the first trans woman to present for BBC Radio 1 and Channel 4 and has won various awards, including Ultimate Trailblazer at the Cosmopolitan Ultimate Women of the Year Awards in 2014.

She co-founded All About Trans in 2011, a project to connect trans people with the media that lead to BBC2 comedy Boy Meets Girl and Eastenders’ first trans character.

In recognition of her campaigning, the Independent on Sunday named her the most influential lesbian, gay, bisexual or transgender person in Britain in 2013.

Her memoir is being published next year by Penguin.