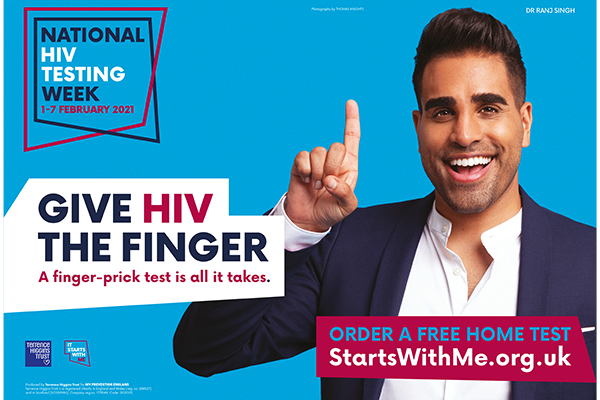 New research from HIV/sexual health charity Terrence Higgins Trust (THT) has revealed just 1 in 5 adults have ever tested for HIV in the UK despite testing initiatives to find the thousands living with undiagnosed HIV being crucial for the Government achieving its life-changing goal of ending new cases of the virus by 2030.

The data – released to mark National HIV Testing Week and based on YouGov polling of over 2,000 UK adults – also shows uptake is far lower in heterosexuals, with just 16% having previously tested compared to 58% of gay and lesbian respondents surveyed.

This comes as new figures from Public Health England (PHE) show the impact of Covid-19 and social distancing on how people are testing for HIV. Between January and August last year there was a 14% increase in HIV testing done via online orders and taken at home compared to the same period in 2019. Despite this, there was a worrying drop in overall testing in the first half of 2020 as a result of lockdown.

Due to the restrictions in force across the country, the advice from both charities and sexual health services is to test for HIV safely from home to protect against coronavirus, with thousands of self-sampling kits made available by PHE to order for National HIV Testing Week which starts on Monday, February 1.

Routine HIV testing needs to be drastically increased to find the estimated 6,000 people living with undiagnosed HIV in the UK, says the charity. That includes increasing testing figures outside those groups traditionally most impacted by HIV – with heterosexuals making up 4 in 10 (38%) of those diagnosed in 2019.

High rates of late diagnosis are also a big issue, with 42% of those receiving a HIV diagnosis getting it after their health is already suffering. According to PHE, the rate of late diagnosis is even higher in heterosexual men (52%) and people aged 65 and over (59%).

The new survey research also found an urgent need to better publicise the option to test for HIV at home. Sixteen per-cent of UK adults knew they could test for HIV at home with 13% of those that have had a test before, ever having actually tested that way.

This is a far cry from how things were in the past, with new Channel 4 drama It’s A Sin documenting how the results of an HIV test used to take six weeks. Now testing is quick and straightforward, with some tests giving a result within just 15 minutes.

And making access to HIV testing easy and convenient is key. When the HIV Commission – established by THT, National AIDS Trust and Elton John AIDS Foundation – released its landmark report for ending new HIV cases in England by 2030 it recommended that everyone is tested on an opt-out basis regardless of age, gender, ethnicity or sexuality in as many possible places as possible across healthcare including A&E departments, GP surgeries, routine cervical smears and gender clinics.

Ian Green, Chief Executive at THT, said: “Despite all the progress made in the fight against HIV, there is still a shockingly high number of people out there who have never tested for the virus. If we’re to find all of those living with undiagnosed HIV in this country, that needs to change and quickly. Unlike in It’s A Sin, where the characters wait weeks for their results, HIV testing is now straightforward and easy to do – with the best option during the coronavirus pandemic to test at home. Plus, thanks to huge improvements in medication, someone diagnosed promptly and accessing treatment will live as long as anyone else their age.

“HIV can affect anyone – no matter your gender, age, sexuality of ethnicity. Which is why testing everyone who comes into contact with our healthcare systems is crucial for achieving the goal of ending new HIV cases by 2030. To ensure that the coronavirus pandemic and lockdown doesn’t set us back in achieving that goal, we’re encouraging everyone to order a free HIV test kit to do at home this National HIV Testing Week.”