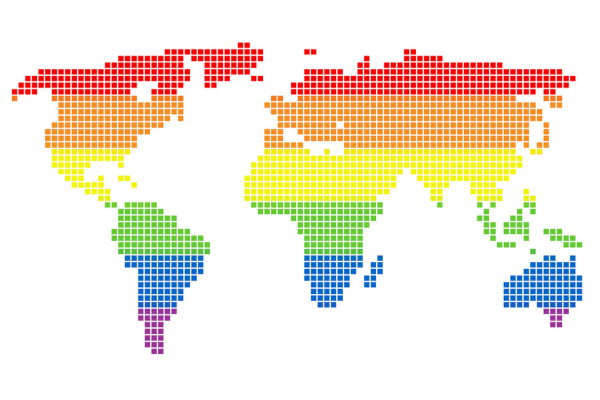 Instead of relying on hearsay and anecdotes from other travelers, travel journalists, writes and couple Asher and Lyric Fergusson took a deep look at LGBTQ+ rights, country by country. They’ve gathered data from a variety of trusted international sources to create a “LGBTQ+ Danger Index” that will help you find the worst (and safest) countries for LGBTQ+ travel.  After reading about the surprisingly barbaric anti-LGBTQ+ laws in countries like Barbados and Jamaica they  decided to devote some serious time to research into the subject and what they found shocked them. They looked at the top 150 most-visited countries in the world by number of incoming tourists, then examined LGBTQ+ rights by country.

You can see their full findings here:  The Worst (& Safest) Countries For LGBTQ+ Travel in 2019

There are some places on the planet where it’s perfectly ordinary to kiss or hold hands with a same-sex partner in public, but in other places, that action could result in fines, imprisonment, hard labor, whipping, or, in some cases, death. These countries where homosexuality is illegal are also often severe human rights violators, usually penalizing male/male sexuality and/or trans women most harshly.

Unfortunately, some countries where it’s illegal to be gay or trans also happen to be popular vacation spots. For instance, it’s illegal to be gay in Jamaica; the “buggery law,” which is leftover from the colonial era, allows for a sentence of up to 10 years in prison including hard labor. Jamaica was called “the most homophobic place on Earth” by Time magazine in 2006.

The couple used data from a variety of trusted international sources. The Danger Index  was calculated using eight important factors such as legalized same-sex marriage, criminalization of hate-based violence, Gallup’s 2018 poll: “Is it a good place to live for gay or lesbian people?” and illegal LGBTQ+ relationships and propaganda/morality laws.

Those looking for trans- and gay-travel-safe countries should reconsider popular vacation destinations like Malaysia, Singapore, Saudi Arabia, Morocco, Myanmar, and Egypt as well as some of the more popular beaches in the Caribbean, like Saint Lucia and Barbados.

Being born this way can be rough, but one thing should not give you anxiety when you’re trans, bi, lesbian, queer, or gay: travel. Europe, North America, Oceania, Africa, Asia, and South America all have LGBTQ-safe countries where it’s OK to just be you. As of now, 27 countries have marriage equality (which will soon be 28 once it becomes legal in Costa Rica), and 11 countries provide civil unions or partnerships.