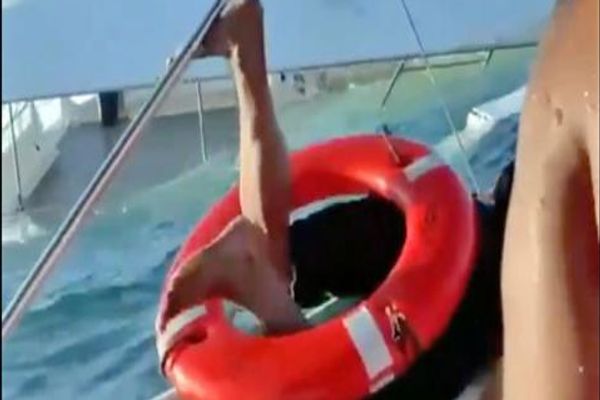 Jeffrey Sanker is known for hosting America’s biggest gay circuit parties. His decision to press ahead with 2020’s NYE party in Puerto Vallarta shocked many. Puerto Vallarta – also known as PV – is a party town in Mexico famed for its huge gay scene.

“Per the current state government mandate related to COVID-19, all private and public events of more than 8 people are strictly forbidden. All public festivities in the state of Jalisco have been cancelled, including the previously promoted White Party Weekend at Mantamar Beach Club & Sushi,” according to the PV tourist board.

So, the super-spreader party was moved across Banderas Bay to the neighbouring state of Nayarit. Party goers posted videos across social media of packed events with the usual shirtless, muscled men dancing the night away. As a global pandemic rages they were, quite literally, dancing while Rome burned.

The gay gods sat in judgment and they were not pleased. The PV Delice Dream catamaran carrying the Rona Ravers came into choppy waters. With almost excessive metaphorical resonance, the catamaran sank. Videos appeared on Twitter showing people in life jackets being dragged onto rescue boats. Many would have been far from sober. It must have been a traumatic experience – you can hear many people in distress in the video. Fortunately, everyone survived. Their dignity, alas, did not. More pictures here – Titanic part 2: PV edition— All about the Benjamins (@fitnessgayz

This was the gay Titanic moment of 2020. A thousand memes were born online. Bianca Del Rio declared on Twitter, “To the gays on that sinking boat in Mexico………..
DO NOT WORRY…. THERE IS ALWAYS ALL STARS!”

The sinking ship was referred to as “The Boston G Party.” The jokes were writing themselves.

Many of the Rona Ravers were named and shamed online. Debates about shaming and cancel culture followed. Overwhelmingly, the response to the sinking party ship has been one sided. Attending the circuit party was seen as an example of gross negligence. The circuit parties will return when the pandemic is under control, but the Rona Ravers might not be made to feel so welcome.

A Facebook group called Circuit Karens has been launched for the unrepentant Rona Ravers.