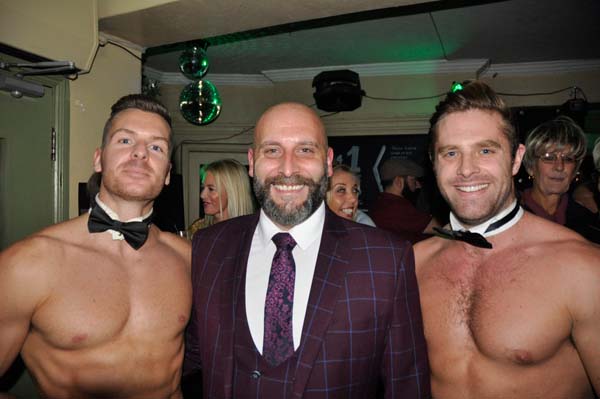 Charles Child and his team finally said goodbye to Doctor Brightons on Saturday, November 3, raising £1,040.06 for the Rainbow Fund in the process.

THE evening kicked off at 7pm with a VIP party for close friends and regular customers. Charles provided wonderful canapes, prosecco and oysters served by some sexy butlers in the buff before throwing the doors open to the general public at 9pm for a party that went on till the early hours of Sunday morning.

Charles and his team celebrated their ninth birthday in March this year in the knowledge their landlords, Enterprise Inns, were not going to renew their lease on the building which was coming to an end.

Charles wanted to take over the responsibility of a new lease, but Brighton & Hove Council told him that despite the fact he had been the tenant for the previous nine years, the new lease would have to go out to competitive tender.

Charles felt that was unfair and announced he would be leaving Doctor Brightons in July when his lease with Enterprise Inns ran out.

The reaction from his customers was immediate and with the help of a supportive lobbying campaign which included his local Green Ward Councillor Tom Druitt he decided to bid for a new 15 year lease which he was awarded in July at almost 3 times the previous rent.

Pride came and went, but no lease was forthcoming from the City Council so reluctantly Charles decided he could not continue to run his business with no guarantees about the lease and decided to return to Norwich to run his flower business.

James Ledward, Editor of Gscene Magazine, said: “Charles and his team will be a great loss to the commercial LGBT+ scene in Brighton and Hove. He has been a great supporter and champion of the Rainbow Fund, is the current holder of the Golden Handbag for Favourite manager in 2017-18 and Doctor Brightons has won the Golden Handbag for Favourite Mixed venue for the last two years.”

Customer were invited on the night to make a donation to the Rainbow Fund and the magnificent total of £1,040.06 was raised in the bucket collection.

Chris Gull, Chair of the Rainbow Fund, added: “I would like to thank Charles and his team for supporting our concept of centralised fundraising and the thousands of pounds Doctor Brightons have raised for the Rainbow Fund over the years. Their donations have benefitted many LGBT and HIV organisations and we will all miss the venue and Charles’s generous hospitality.”