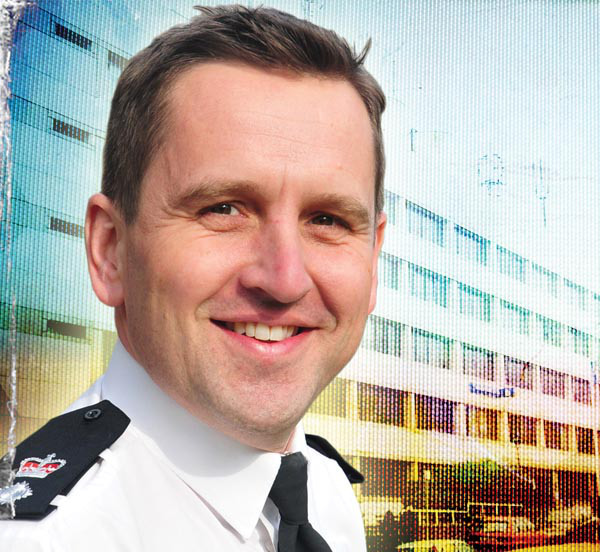 As Pride approaches James Ledward talks to Chief Superintendent Nev Kemp about the challenges, in the present economic climate, of policing Brighton Pride and the Pride Village Party in 2015.

CHIEF Superintendent Nev Kemp was appointed Divisional Commander for Brighton and Hove in 2013, seventeen years after joining the police. On becoming Division Commander he took on the role of the forces LGBT Champion.

As the Gold Commander policing Pride it is his responsibility to deliver a safe event, not only for the LGBT community, but also for local residents and visitors to the city. He understands the economic importance of Pride to the City of Brighton and Hove and most importantly to the Rainbow Fund who receive £1 a head from every ticket sold to distribute to LGBT/HIV organisations providing effective front line services to the LGBT community in Brighton and Hove.

A new approach to the Village Party was required and an agreement was reached to work in partnership with the Pride organisers, the City Council and other agencies to produce and deliver a paid for Pride Village Party event in 2014 that was safer for everyone and would give visitors to the city a positive impression of Brighton and Hove.

Commander Kemp said: “I spoke to a police officer last year who said this is now a great event, and if off duty, he could now come and would really enjoy it, whereas the previous year it felt unsafe.

“Pride is one of the most challenging events we deliver in Brighton and Hove. For Sussex Police it is up there with the Lewes Bonfire, except there are many more people at Pride with estimates of up to 160,000 revellers on the streets.

“With Pride, there are a number of events that go on throughout the day stretching officers shifts. We need to refresh our numbers which means we use a lot of officers and need to bring some in from outside Sussex to provide cover.

“Drugs are quite a big challenge, especially when they are mixed with alcohol and last year in particular nitrous oxide legal highs proved to be a big problem. We seized thousands of capsules, the difficulty we had is that it is not illegal to sell them to people over 18, so we had to use a really old bit of legislation, which we don’t often use, the Pedlars Act of 1881, to stop them being sold. If people selling the canisters didn’t have a Pedlars License we were able to use that as the grounds to seize their stock.

“For example there was one young girl who the consultant on duty at the Sussex County Hospital A & E thought was going to die. She had taken nitrous oxide and drunk alcohol. Her survival was touch and go.

“For Sussex Police it is not about preventing people at Pride having fun. We are never going to say don’t drink, but last year the combination of nitrous oxide and alcohol, did worry us. We did what we could, and seized thousands of capsules. This year we will be doing exactly the same.

“Another fairly big challenge for us was the issue of ‘respect’ for people, including police officers on duty. During the day sexual assaults were going unreported, including on some of the uniformed security staff and police officers on duty. I have not only a responsibility for the public but also for my own officers, so this year I would like to see more emphasis on respecting people’s boundaries. From a policing perspective officers involved tell me Pride is a great event and they really want to support it. We don’t want to cause upset by being kill joys but on the other-hand people are entitled not to be groped and grabbed during the event.

“The officers we use on the day are a mixture of specialist public order and general neighbourhood policing officers. I spoke to some officers last year who had worked on Pride for the first time. Most of them really enjoyed the day and were more concerned that they had been on their feet 15 hours with only a bite to eat at the start of the day.

“Pride generally has a great atmosphere and people are really pleased to see the police marching on the Pride Parade. For my officers it is a unique experience and those officers from outside Sussex are often quite goggle eyed at the scale of Pride, what goes on and the general carnival atmosphere.

“Last year my daughters who are 15 and 16 came, they absolutely loved it and want to come again this year. I personally would like one year not to police it and just go with my family and enjoy Pride with them.

“The safety of people at Pride is really important and that does cost money from the police budget.

“In terms of partnership working, I have got a very good relationship with Pride and they have been very responsive to concerns raised in the post event agency debrief.

“This year for the first time I have tried to agree with Pride how things are going to look over at least the next three years, rather than doing it just a year at a time.

“Now that Pride is a ticketed and paid for event we have guidelines to follow and are required to charge for elements of the services we provide when we are policing inside Preston Park and the Pride Village Party.

“This will not include officers who are working in plain clothes, identifying people who are trying to steal people’s bags and that sort of thing.

“The Association of Chief Police officers (ACPO) have guidance which says if an event is ticketed 100% of the policing costs should be charged.

“I want Pride to be a success because I think it is brilliant for the city. It is one of the best things that happens and the last thing I want is to do anything that undermines its success. However, on the other hand my budgets have been hugely reduced this year.

The Pride organisers work very hard, do a very good job and deserve to be rewarded for their efforts like everyone else.”

Pride should be a fun and joyous occasion for everyone attending the various different celebration and parties during the weekend. Unfortunately that is not always the case as a minority of people spoil the fun by acting inappropriately and sometimes even breaking the law whilst doing so.

Sussex Police ask that everyone plays their part in keeping Pride a safe and enjoyable event. We can all do this by respecting one another.

Respecting the dignity of our various identities and presentations. This means celebrating who we are rather than calling strangers hurtful names. Everyone has a place at Pride including transgender and bisexual people.

Respecting our physical boundaries. It is never acceptable to touch another person without their consent, especially in a sexual manner. Groping is a criminal offence regardless of who it is; whether this is your friend, someone you’ve just met, or even a police officer. Consent is very sexy!

Respect your own body. Take care to know your own limits. Pride isn’t a contest on how much you consume. It’s no fun to not remember the day before and even less to end it in A&E.

♦ The telephone signal in the Preston Park and elsewhere in the city can get jammed so contacting friends becomes difficult. Make plans beforehand and stick to them

♦ Stay with friends you trust.

♦ Don’t accept drinks from strangers or take substances you can’t verify what it is.

♦ Seek out help. Police are on hand to assist but may need to refer you onto a designated team or place where you can report crime, hate crime or any other issue you might have. Call 999 in an emergency or 101 if it’s less urgent.

♦ If you don’t feel able to speak to police, you can also report hate incidents to the LGBT Community Safety Forum at the Access Tent at the south end of Preston Park. You can also talk to them after the event on 01273 231189.