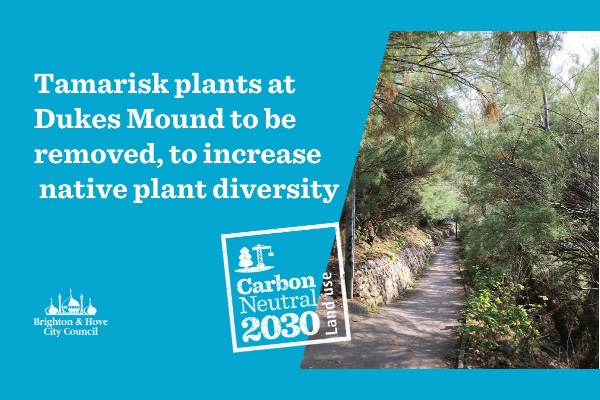 Early works are set to start soon on reinvigorating Dukes Mound aka ‘The Bushes’  as part of the Black Rock development, with works planned to kick off in mid-February. Some clearance work has started this week.

The large non-native plants which are currently overgrown in the area, affecting access and the view of the sea, will be cut back to help create more native plant biodiversity in the future stages of the wider regeneration of the area.

With the ongoing regeneration of the eastern seafront, Brighton & Hove City Council (BHCC) is taking the opportunity to cut back some non native tamarisk shrubs to allow new native grassland seed to flourish, increasing the plant biodiversity in the area.

Trial removals of some of the tamarisk at Dukes Mound have already taken place with positive results and details of the full scale of removal are still being decided, likely to take place over a four to six week period.

About three-quarters of these non-native bushes are due to be removed as part of this stage of the project, which BHCC is managing with partner organisations in the project, Land Use Consultants and EH Treecare.

Indigenous Sussex seeds will be supplied by The Millennial Seed Bank, which will be sown in a subsequent contract in March, using specialist techniques to cope with the steep slopes.

The new habitat will start to emerge progressively over the next few years and will include species such as rampion, mullein and bird’s foot trefoil in addition to local grass species from the Downs.

The works form part of the recently approved Black Rock Regeneration Scheme, which will also include widespread beach habitat creation in the area and refurbishment of the Grade II listed buildings on the site, the Temple and Reading room. ‘The Bushes’ has been a popular meeting place for part of the LGBTQ+ community for almost 100 years.

Cllr Tom Druitt, Chair of the Black Rock working group, said: “Increasing local biodiversity in our city is a vital step in fighting the ongoing biodiversity emergency that we face.

“We need to act now to make a real difference and removing the wildly overgrown tamarisk to allow the native species to thrive, will bring local grassland habitats back to life.

“The Tamarisk was introduced many years ago and has grown so extensively it has prevented light reaching the ground, limiting all other species and discouraging people from accessing the area – removing them will bring this area back into use for everyone and make it more of a pleasure to visit.

“Now more than ever, as we enter a post-Covid world of outdoor leisure spaces, we want to make sure these precious spaces are available for use by everyone”