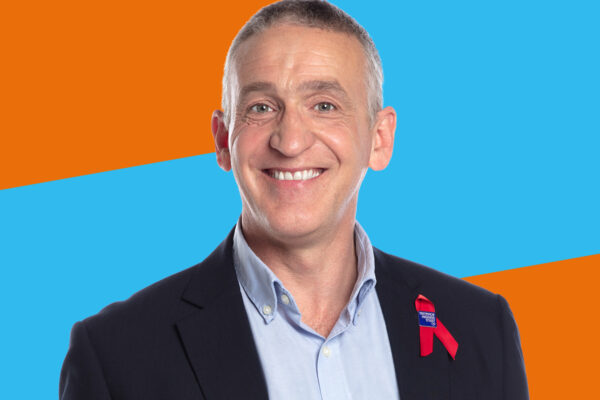 Ian Green is to step down as Chief Executive of HIV and sexual health charity Terrence Higgins Trust (THT) – more than 25 years on from his own HIV diagnosis and after almost seven years in the role.

The announcement comes after the charity marked 40 years since its namesake Terry Higgins‘ death this summer when he became the first named person to die of an AIDS-related illness in the UK on 4 July 1982.

Before becoming Chief Executive in April 2016, Ian accessed the charity’s support services after being diagnosed HIV positive in 1996. He will leave early next year following the successful recruitment of his successor.

Highlights of Ian’s time include successfully campaigning for the HIV prevention pill PrEP to be made available on the NHS and the first-of-its-kind postal HIV testing programme. He also committed to ensuring the charity is an anti-racist, anti-sexist organisation with a strong focus on equity, diversity and inclusion.

During Ian’s seven years at the helm, THT became the first third-sector organisation in the world to publicly endorse the U=U (Undetectable = Untransmittable) message meaning people living with HIV and on effective treatment can’t pass it on to their partners.

This message has the power to transform perceptions of HIV and tackle the stigma still surrounding the virus. As someone living with HIV, Ian knows first-hand the impact this message can have and amplifying it whenever and wherever possible has been a key priority of his tenure.

Ian will continue this pioneering work and passion for championing the stigma-busting message through a global leadership role with Prevention Access Campaign, which focuses on changing lives through U=U across the globe. In addition, he will have other non-executive roles in the NHS and housing.

Ian steered the charity through difficult times, leaving it in a far stronger position than when he started. That includes an improved relationship with the HIV sector to ensure a cohesive cross-organisational response to preventing HIV and supporting those living with the virus.

He leaves THT in a secure financial position at the start of its new and ambitious three-year strategy, Together We Can.

Ian Green, Chief Executive at THT, said: “It’s with very mixed emotions that I’m making this announcement. As someone living with HIV for over a quarter of a century, it’s been the privilege of my career to lead this life-changing organisation at such a crucial time. I’m deeply proud of what’s been achieved in the last seven years and know I’m leaving the charity in a strong position to achieve its mission of ending new HIV cases by 2030.”

Jonathan McShane, Chair of Trustees at THT, said: ‘Ian has not only taken THT from a difficult point in our history and through challenging times, he has been a Chief Executive with real vision. His legacy goes way beyond the organisation. His leadership ensured THT was the first HIV charity in the world to embrace the ‘Undetectable = Untransmittable’ science and develop the Can’t Pass It On campaign.

“He worked with partners on the push to make PrEP available on the NHS and brought partners together through the establishment of the independent HIV Commission which led to the Government committing to the target of ending new transmissions of HIV by 2030.

“Ian will be sorely missed but he should be proud that he will leave an organisation better equipped than ever to make a real difference to people’s lives.”

Deborah Gold, Chief Executive at National AIDS Trust, said: “Ian has been an extraordinary Chief Executive of THT and a great friend to me and others in the sector. Ian’s leadership has transformed the organisation’s culture and approach, and consequently its reputation among its peers.

“Ian’s approach as an ally has been hugely consequential; his support was invaluable when we were trying to force the NHS to provide the HIV prevention drug PrEP and our partnership created the HIV Commission and a government HIV Action Plan that continues to deliver big change. We will miss him and we wish in well in his new endeavours.”