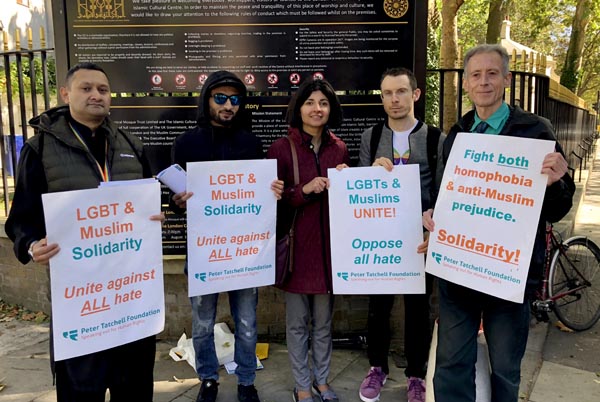 MUSLIM worshippers at Central London (Regents Park) mosque reacted with a mixture of interest, hostility and indifference as they were leafleted and engaged in conversation by LGBT+ Muslims supported by the Peter Tatchell Foundation on Friday, September 21 when they arrived for Friday prayers.

Action organiser Peter Tatchell, said: “There were only half a dozen overtly homophobic and aggressive comments; mostly from younger worshippers. Some attendees were curious and others bemused, while the mosque authorities were friendly and obliging. These reactions are indicative of changing attitudes in the Muslim communities towards LGBT+ issues. The level of homophobia was much less today than three or four years ago.”

Friday’s action was part of the campaign – LGBT-Muslim Solidarity: Fight all hate – organised by the Peter Tatchell Foundation at the request of LGBT+ Muslims.

“Our message to mosque worshippers was that the Qur’an does not explicitly condemn homosexuality and stipulates no punishments. There is no basis in the Qur’an for the persecution of LGBT+ Muslims. Homophobic Muslims are misinterpreting the Qur’an,” added Mr Tatchell.

“The Qur’an states that is it the full and final word of Allah and that it requires no addition or interpretation. The anti-LGBT Hadiths and Sharia law are man-made interpretations which have no basis in the Qur’an. A true Muslim follows the Qur’an alone. We appeal to all Muslims to reject homophobia and to embrace LGBT+ Muslims as a valid and valued part of the Muslim community.”

“This solidarity campaign urges the LGBT and Muslim communities to stand together against prejudice, challenges Muslim homophobia and defends LGBT+ Muslims against the far right and Islamist extremists,” said Mr Tatchell.

Muhammad, a gay Muslim said: “Nowhere in the Qur’an does it say you should punish a gay Muslim. Too many Muslims misunderstand the story of Lut (Lot). It condemns male rape but not loving consenting same-sex relationships. This misunderstanding leads to so much suffering for LGBT+ Muslims, such as rejection by families and mosques, depression, suicide and even so-called honour killings.”

Ejel, another gay Muslim added: “It is imperative that our LGBT Muslim voices are heard and that we engage with the mainstream Muslim community. I’ve spoken in some mosques on LGBT+ issues but many mosques still don’t acknowledge and support their LGBT+ worshippers. That needs to change.”

Tehmina, a Muslim human rights activist, added: “The dominant interpretations of Islam run counter to LGBT equality and contemporary human rights standards….(however) the academic work of Scott Siraj ul-Haq Kugle on Islam and homosexuality, and the new online theological resource set up by Daaiyee Abdullah, showcases that LGBT-affirming interpretations of Islam are possible.”