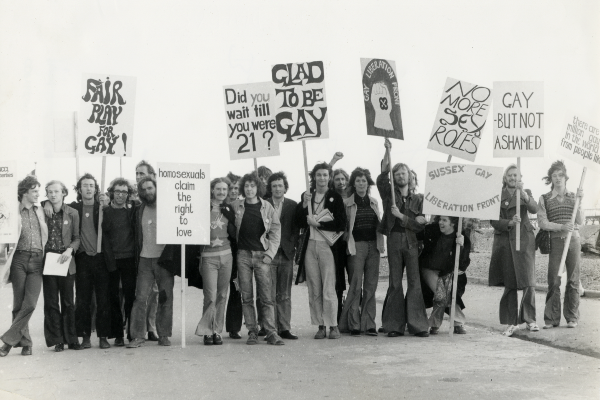 On a windy afternoon in October 1972, a small group of people gathered between the piers on Brighton seafront. There were roughly 20 of them with an assortment of banners, badges and a great deal of courage. This was the Sussex Gay Liberation Front (SGLF) and they were there to make a point.

Mark Rowlands, one of the founding members, remembers “we followed King’s Road along to the Palace Pier and round into the Old Steine. We did our best to make our presence felt. ‘Give us G’, someone yelled. ‘Give us an A. Give us a Y. What does that spell?’ ‘GAY’, we tried to roar. ‘And what is Gay?’ ‘Good!”

SGLF started life in January 1971, comprised of students and staff at the University of Sussex, along with lesbians and gay men from the town. Co-founder Simon Watney remembers ‘The idea that one is Glad to be Gay may sound terribly naïve today, but it was the beginning of a whole notion that you could be lesbian or gay and not be ashamed, and stand up for yourself. It gave people confidence.’

The GLF wanted ‘to bring homosexuals together in a different atmosphere, away from the ghetto, away from isolation, to bring an end to their treatment as psychiatric cases, to reject all we have been told to feel about ourselves. We want only one thing – that the love of a homosexual should be treated on the same basis as the love of a heterosexual, so that all people in our society can realise their full potential’.

The 1972 Gay Day (pictured above) specifically campaigned for an equal age of consent. At that time it was 21 and came with a host of conditions: only in private accommodation (not hotels), no one else be present in the building (even in a different room).

The march was originally intended to move down Western Road into the main shopping area but, at the last minute, officials re-routed it for fear that ‘the gays’ banners might cause a breach of the peace.’ (Gay News)

‘On Brighton’s Lower Esplanade a gang of eight or nine youths began jeering and a scuffle broke out. Police intervened, but no arrests were made.’ (Argus)

Not to be deterred, the SGLF decided to organise a bigger event for the following year. London had had its first Gay Pride march on July 1, 1972, the nearest Saturday to the anniversary of the Stonewall riots on June 28, 1969, so it made sense for Brighton to follow suit.

Brighton’s Gay Pride in 1973 was a whole weekend of events, starting with a disco at the Stanford Arms (now The Joker) on Friday, July 6, the regular meeting place for the SGLF. That was followed by a midnight wedding between John Roman Baker and Graham Wilkinson on the beach.

Allowing for what was probably a late night, Saturday began with a ‘Gay Pride March starting from Norfolk Square, Western Road at 2.30pm. We shall march down to the seafront and along to the fish market opposite the Ship Hotel, distributing leaflets as we go.’ (SGLF newsletter)

That was to be followed by another disco (obviously), which was held at the Royal Albion Hotel, with tickets costing 50p each. Sunday was a gay picnic back on the beach to the west of the Palace Pier. According to Gay News the dance at the Royal Albion was ‘highly successful’, attracting 200 people, and the SGLF were ‘undeterred by Brighton Council’s rather pathetic refusal to allow them to hold dances on corporation property’.

SGLF member Bob Apps booked venues for SGLF and even managed to arrange a couple of dances in the Royal Pavilion dining room, with the kitchen becoming a bar for the evening. Fellow member Doug Coupe said: ‘Bob was a very brave man and overcame many difficult confrontations, not least in his dealings with local authority representatives who at that time did not conceal their disapproval of gay people.’

Unfortunately the turnout for Gay Pride had been disappointing as SGLF spokesman Graham Philips told Gay News: ‘many homosexuals in ‘responsible jobs’ steered clear of the demo march for fear of being publicly identified and perhaps sacked as a result.’

On a side note, that very thing happened to Doug Coupe. He was a teacher in the local area, but after being outed he had ‘a very difficult time, for years’, until he left the job.

Graham Phillips told Gay News that nevertheless ‘the march was one more step towards getting homosexuality accepted.’

So when you celebrate Pride, think about the people that came before you, before me, who had the guts to stand up for who they were, when violence and abuse were frequently the consequences, they did it anyway.