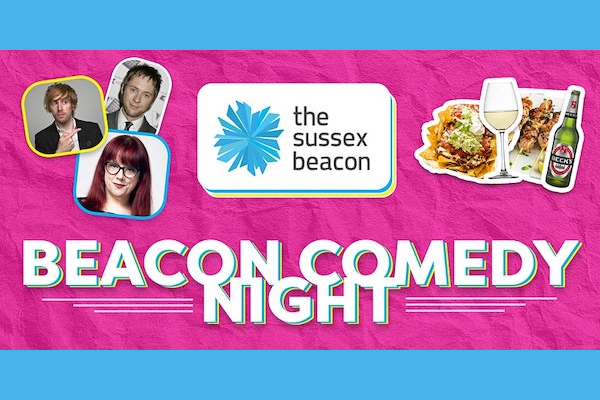 After a difficult year, The Sussex Beacon has announced something to cheer us all up – The Complete Comedy Night with comedy, meal and drink for £25 at The Grand Brighton on Friday, September 17 from 6.30pm. For tickets, CLICK HERE.

Returning to MC the Complete Comedy Night will be the fabulous James Redmond who’s known for touring comedy clubs across the country and for his roles as Rory Finnigan in Hollyoaks and Abs Denham in Casualty.

Joining James on stage will be:

The supremely talented Angela Barnes will headline the night. After a career in health and social care, Angela Barnes took the plunge and embarked on her life-long dream to be a comedian. Within just a couple of years she had won the BBC New Comedy Award in 2011 and has now gone on to star in Mock The Week and BBC Radio 4 series You Can’t Take It With You and The News Quiz.

One of the country’s rising stars, Mark Simmons is the master of the one liner who has taken the step from stage to screen in recent years appearing on shows like Mock The Week.

Apologetic Eton and Oxford alumnus Ivo started stand-up in 2009 at the age of 18, and later became the youngest ever winner of the prestigious So You Think You’re Funny award for new acts at the Edinburgh Fringe. He has since become a regular fixture in the clubs and theatres of the UK circuit, with a gauche charm and crafty, self-aware wit which has proved a hit with audiences of all ages, and led to appearances on multiple TV and radio shows including Live At The Apollo, Mock The Week, Live From The BBC and Comedy Central At The Comedy Store. He is a regular writer on Fighting Talk and The Last Leg as well as several others.

There will be two great meal choices on the night, plus your choice of wine, beer or soft drink. Simply select your preferred option when purchasing your tickets!

Seating on the night

Seating on the night will be in tables of six. If you have less than six in your party you may be asked to share a table. If you have a group of over six then email fundraising@sussexbeacon.org.uk and the Sussex Beacon will try and accommodate you.

*The night will be run in accordance with government guidance and will be adapted in the event of any future announcements including those relating to masks and social distancing. The Sussex Beacon will keep all ticket holders updated in the event of any adaptations needed to be made as a result in a change of government guidance. Acts are correct at time of listing but are subject to change due to unforeseen circumstances.