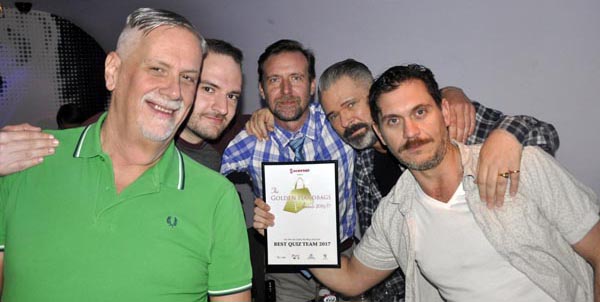 Subline the gentlemen’s bar on St James Street, beat twenty other teams at Charles Street last night to become the cleverest LGBT+ crew in the city and regain the crown they last held in 2014.

The quiz was hosted by on form Lola Lasagne who had an answer for everyone and kept the evening moving along at breakneck speed, barely pausing to neck the line of drinks that an appreciative audience kept insisting on buyer her.

Lola said: “This is my favourite gig of the year which bring together the voluntary sector, the statutory sector and local LGBT+ businesses all under one roof to let their hair down and have a really good evening out.

“I would like to thank my assistants DJ Ruby Roo, Jon- Paul Mager, and Nicki Delmege who kept the quiz moving along very smoothly, James Brooks for writing the questions and Chris Marshall and all his wonderful staff at Charles Street for working so hard all evening .”

Gscene editor James Ledward explained the changes to this years voting categories at the Golden Handbag Awards and called for a fair and fun campaign.

He said: “For many people a Golden Handbag Award is more than a piece of paper, it is recognition of years of work serving the city’s many and varied LGBT+ communities.”

Winners on the night were Subline with Charles Street and Bedford Tavern sharing joint second place.

However, the star of the show was Lola Lasagne who managed to wring every last moment of drama out of the proceeding, especially when revealing the positions of all the teams at the end of the evening.

£420 was raised for the Rainbow Fund who distribute grants to local LGBT+ organisations who provide effective front line services to LGBT+ people in the city.

Voting for the Golden Handbags 2017 opened at the end of the quiz and this years winners will be announced at a star-studded ceremony at Hilton Brighton Metropole, on Sunday, June 11 at 7.30pm.

To vote online in the Golden Handbags 2017, click here: and press the banner at the top right of the website, which will take you to the new Golden Handbag website that is being constructed by DJ Tony Button.