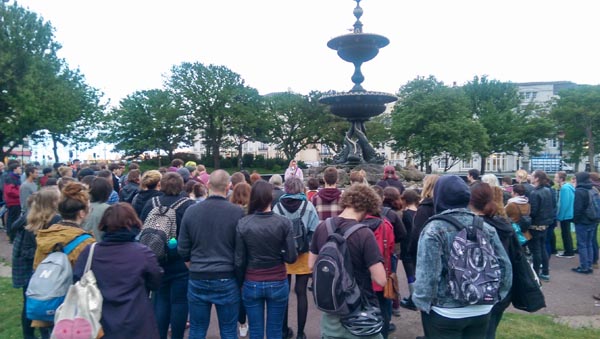 Last night about 180 people attended a Vigil at the Old Steine, organised by the LGBT Q university societies from Sussex and Brighton Universities.

Students from both universities, young people and allies held a moving vigil for the dead of the Orlando massacre.

The organisers focused on the fact that many of the victims were young people like themselves enjoying a night out, only to be murdered by a hater.

Every one in attendance was asked to remember each victim as a person, that the club was regularly attended by people from the Latina and Trans communities, and there were Trans people featured on the flyer for that night at Pulse nightclub.

The speaker reminded everyone assembled of the power of forgiveness and that we should reach out also to LGBT Muslim people and “the strength of our community was in our breadth and resilience”.

A poem was read and people came forward during the reading out of the names of those that had died to light fifty candles while people stood in contemplative silence.