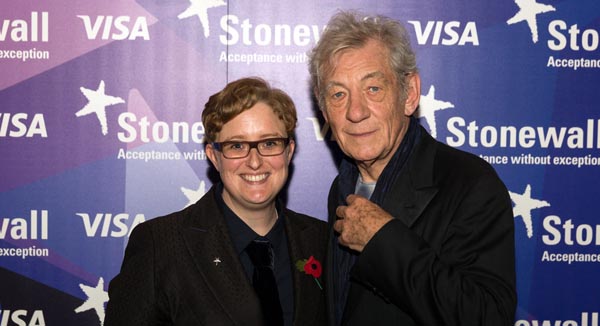 Stonewall, the national LGBT equality charity was founded in 1989 by a small group of people who wanted to break down barriers to equality and works to create a world where everyone can be accepted without exception.

The awards were at the V&A in London and marked achievements over the last decade.

Broadcast of the Decade was awarded to Hollyoaks for its consistent tackling of difficult issues and integration of LGBT characters.

Liz Mackean, was awarded Journalist of the Decade for her magnificent Channel 4 Dispatches documentary Hunted, which focused on violent homophobic ‘hunting’ in Russia.

The Guardian’s consistent and sensitive coverage of LGBT issues in Britain and abroad saw the paper receive the Publication of the Decade award.

Nigel Owens was presented the Sports Person of the Decade award for being such a prominent and visible role model in his field, and Sarah Waters collected Writer of the Decade for having such an impact on LGBT readers through her writings.

Lord Alli was named Politician of the Decade for his relentless campaigning around same-sex marriage and for being the first openly gay member of the House of Lords.

Entertainer of the Year was awarded to Dan Gillespie Sells, the openly gay singer of British group The Feeling, for his open and frank conversations over the last ten years about his own sexual orientation and upbringing.

Ruth Hunt, Chief Executive, Stonewall said: “I’d like to extend a huge congratulations – and thanks – to all of those nominated tonight. And all of those who have been nominated throughout the last ten years of the Stonewall Awards.

“We have come so far for lesbian, gay, bi and trans equality – but we still have so much left to do. And to do that, and to be the change we want to see, we must continue to work together to achieve full equality. This year marks the final year for the Stonewall Awards but watch this space for something new next year, which will reflect all our communities and brings people from across those communities together. Acceptance without exception. Where all lesbian, gay, bi and trans people, in Britain and abroad, can live freely as themselves without fear of persecution.

“So tonight, we celebrate. And of course tomorrow, our work continues.”

Publication of the Decade (presented by Jane Hill):

Politician of the Decade (presented by Charlie Condou):

Writer of the Decade (presented by Evan Davis):

Journalist of the Decade (presented by Dr. Ranj):

Broadcast of the Decade (presented by Mary Portas):

The World’s Worst Place to be Gay?

Entertainer of the Decade (presented by Kevin Jenkins):

Sports Person or Team of the Decade (presented by Lord Alli):

Orange Is The New Black