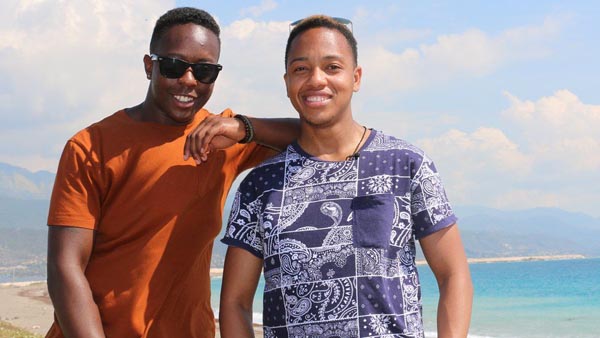 In January of this year a BBC Newsbeat documentary followed two transgender friends on a life changing journey to one of the most transphobic and homophobic countries in the world.

Steffan and Romario, both now living in the UK, traveled back to Jamaica to reveal their new identities to their families.

On the eve of an emotional return to Jamaica, this months GScene cover model Romario Wanliss summed up how many LGBT people have felt throughout their lives when he said; “I’m battling between feeling revengeful, vindictive and at the same time feeling hopeful, it’s a mixture of feelings”.

There is almost a casual bravery from the friends as they scroll through local news reports on their smart phones of local homosexuals being set upon by an angry mob and murdered in broad daylight. There is however a remarkable normality to the Romario and Steffan who present as a two guys, just passing the time of day. Dressed in the mundane every day designs that adorn millions of young men the world over, there is certainly little in their appearance to attract the potential unkindness of strangers.

The documentary follows Romario through an emotional reunion with his sister and later father, on-screen. Possibly the most uncomfortable moment is when his sister tells him that although she accepts him as family, she “doesn’t believe in the whole transgender and sexuality thing [sic]”.

Romario’s reaction in the face of such awkwardness is both kind and respectful of his families struggle to accept who he has now become. Their prejudice backed up with biblical references, he calmly speaks of his disappointment, but moves on, seemingly unaffected.

The documentary is just the beginning of Romario’s journey. He has a comprehensive presence online, with social media accounts across all platforms under the name Mr. Black Branson all of which record his transition both emotional and surgical. I caught up with Romario and asked him what was behind his decision to have such a visible and public persona: “early on in my transitioning, I tried to commit suicide, and I was let down by a charity that I had called and I decided that instead of picking up the phone, I would pick up the camera and record how I felt. It comes from the idea that if you share a story you can save a life, and I thought if I share my story, that might mean someone else doesn’t attempt to commit suicide, they would appreciate that they are not alone.”

Even without the context of his transgendered history, here is an individual who is likeable, creative, engaging, intelligent in his commentary both of the world and his role within it.

He is smart, calm, articulate and has a smile that would fill a room. Romario (and his close friend Steffan who makes regular appearances with him online) truly feel like the next generation of LGBT+ youth.The next step.

It is clear from their cultural heritage and discussions of their recorded histories that they have faced discrimination and hostility from friend, foe and family, and yet both seem not in the least bit jaded. I asked Romario if he felt that wider society (not just LGBT+) could benefit from the increased visibility of the transgendered community. “There have been many issues I have faced in my life, for example I have been homeless twice when I was kicked out by family members, I feel personally that by sharing my story and being visible, anyone from any community might look at another person’s situation and I think ‘you know what, my circumstances are not so tough after all’. These days I don’t worry so much about what to wear, about my what my future may hold, I just get up and get on with it, again, share a story save a life”.

Romario describes his future to me as a creative one filled with poetry, spoken word, music and cinematography. “I want, and I want other people to see me as a man, a man who just gets up every day, and gets on.” As Romario himself says on one of his many spoken word YouTube films: “There is a light, you become stronger just like you predicted. You empower, you motivate, some look up to you, some even fear you. The kitten becomes the lion. You are tried, tested, but you are never broken”. Mr. Black Brandon, Romario Wanliss, you are an inspiration to us all.

Romario will be co-compering the main stage at  Trans* Pride in Brunswick Square, Hove on Saturday, July 23.

You can watch their story here.