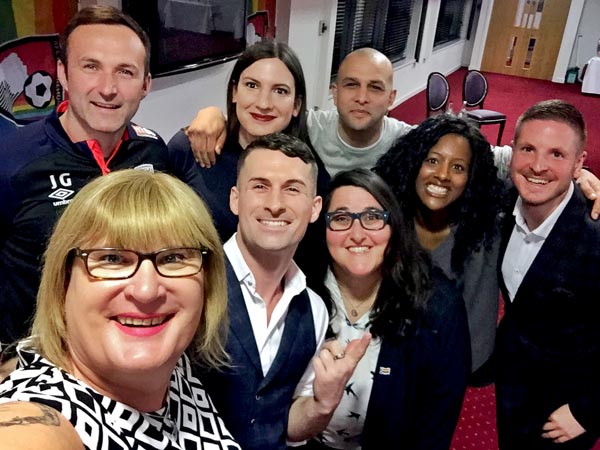 THE Football Industry continues to embrace diversity and Inclusion within its sport, and more and more people are challenging outdated perceptions, and making a stand…

One of the most hi-profile mixed -gender matches ever played,  Football United will kick off at Whitehawk FC’s  TeraPura Ground in East Brighton at 3pm on the Sunday of Brighton Pride weekend.

Sophie Cook said: “When I came out as transgender in Premier League football I had friends that were concerned for my safety, there’d never been a trans woman working within the game. But rather than abuse and hatred I was greeted with love and respect from fans, players and management alike. Yes there were still those that held on to their bigotry but they were the minority. Football holds a unique position within our society to carry the message of diversity and equality into areas that are often ignored and written off. The game is a universal language that transcends social barriers and this game will send out the message that the beautiful game belongs to everyone regardless of sexuality, gender identity, race, religion or gender. Football United? It’s bigger than that, it’s People United!”

Maria Horner from The Football Supporters Association added: “The FSA is all about showing people that live football is on their doorstep. Fans for Diversity helps those who may not think football is for them get along to the game.

“That’s why we’re proud to support and take part in this event at Whitehawk FC– it promises to be an excellent occasion demonstrating just how welcoming football can be.”

For Whitehawk Football Club, Kevin Miller said: “We’re proud to be hosting such an inspirational game, and on behalf of the club I’d like to thank everyone who has helped put this together. We look forward to welcoming fans from the world of football and beyond. This match is an invitation to all ages, colours, races, faiths, and genders, to join us and celebrate Inclusion through football, on a weekend where The City of Brighton lights a beacon for inclusivity around the world…”