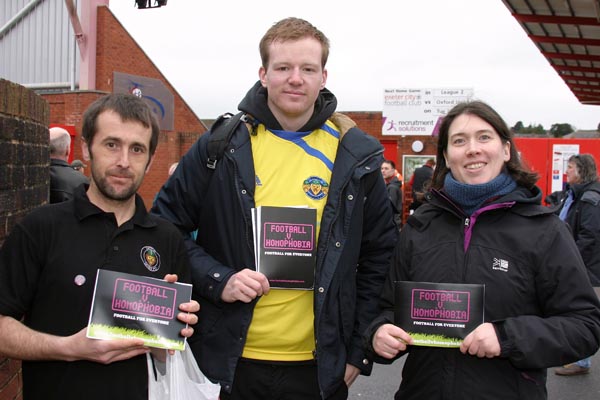 Volunteers from Exeter Pride, the Football v Homophobia campaign in the South West, and members of Devon Lions, the local gay-friendly football club, helped Exeter City Football Club once again take a stand against homophobia at its home game with Newport County on Saturday, February 20.

The match was the club’s annual Football v Homophobia fixture and a number of initiatives to mark the day were organised by the Exeter City Supporters’ Trust and its One Game One Community (OGOC) Group and the Club’s Football in the Community charity.

It was the seventh year Exeter City have held a Football v Homophobia initiative.

Before the game volunteers from Exeter Pride and Devon Lions handed out thousands of leaflets to spectators attending the match.

Players from both teams warmed up in Football v Homophobia T-shirts and the shirts were thrown to the crowd before the start of the game.

The players then walked out for the pre match line-up behind a Football v Homophobia banner.

Articles about the campaign were also be featured in the match programme and anti-discrimination announcements were made before kick-off and at half-time.

Exeter City’s OGOC Ambassador Ollie Watkins supporting the initiative said: “Homophobia like all discrimination has no place in football”.

Alan said: “Homophobia, prejudice and discrimination against Lesbian Gay Bisexual and Transgender (LGBT) people in football is unacceptable and I am really pleased that Exeter City is committed to creating safe and inclusive football environments for everyone, regardless of sexual orientation or gender identity. Prejudice and discrimination in football affects us all, not just LGBT people.”

Exeter Pride is currently organising its eighth annual pride event for the various LGBT communities of Exeter and the South West.

The event will take place on Saturday, May 7 and include a parade down Exeter High Street from the St Sidwell’s Centre to Exeter Phoenix where there will be a programme of events, including workshops, stalls, a panel discussion and entertainment.