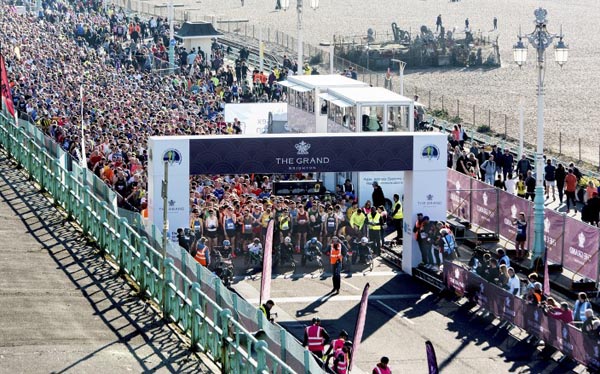 Close to 8,000 runners turned out to run The Grand Brighton Half Marathon on Sunday, February 24, enjoying beautiful sunny weather to run 13.1 miles around the city under crystal-clear blue skies.

THE klaxon sounded at 9:30am, to start the runners on their journey around the city’s sights, which included the seafront cliff tops of east Brighton, The Royal Pavilion, The Grand Brighton hotel, the British Airways i360, the colourful beach huts of Hove seafront and the iconic Brighton Palace Pier.

Now in its 29th year, the race was once again sponsored by The Grand Brighton.

Thousands of spectators lined the route to cheer on the runners, and crowds were entertained with music from The Sundaes, playing live from The Grand’s second floor balcony.

In the main race, the field featured hundreds of runners new to the half marathon distance, plus experienced half marathoners and runners training for a full Spring marathon.

The men’s elite race featured a podium of Pauls –

The Sussex Beacon Wheelchair Race also returned this year, with six entrants from around the UK racing. Paralympian Tiaan Bosch smashed the course record with a time of 53 minutes and 27 seconds. Jazz Turner, was the first female finisher, in 1 hour, 50 mins and 21 seconds.

The Youth Race found a new home this year on Hove Lawns, and was started by Caroline Lucas, the Green MP for Brighton Pavilion. Over 300 children between the ages of 7-17 completed the one-mile course.

Alongside the elite field, thousands of charity runners took to the streets of the city, raising vital funds for over 35 charities, including local charities The Sussex Beacon, RISE and Chestnut Tree House, and national charities including Alzheimer’s Society and Macmillan.

Race director Martin Harrigan said: “What an incredible race we had today – stunning weather and two amazing new course records set by Paul Navesey in the men’s race and Tiaan Bosch in the wheelchair race. But, the biggest shout out must go to all the amazing runners, families, spectators and volunteers who turn up every year and make The Grand Brighton Half Marathon such an incredible event! We couldn’t be more grateful to you all.

“I would also like to say a huge thank you to our headline sponsor, The Grand Brighton hotel and all of the other sponsors and charities who support this fantastic event.”

Andrew Mosley, general manager at The Grand Brighton added: “We are delighted to have been headline sponsors of The Grand Brighton Half Marathon for the second year running. It is a fantastic event, and together with The Sussex Beacon and all of the other race partners, we are dedicated to developing the race. We are already looking forward to next year! It’s always a joy to see our beloved Brighton community come together and raise funds that make a real difference to such a lot of people. Well done to all that took part.”

The race is organised by The Sussex Beacon, a Brighton-based charity which provides a range of services for men, women and families living with or affected by HIV across Sussex.