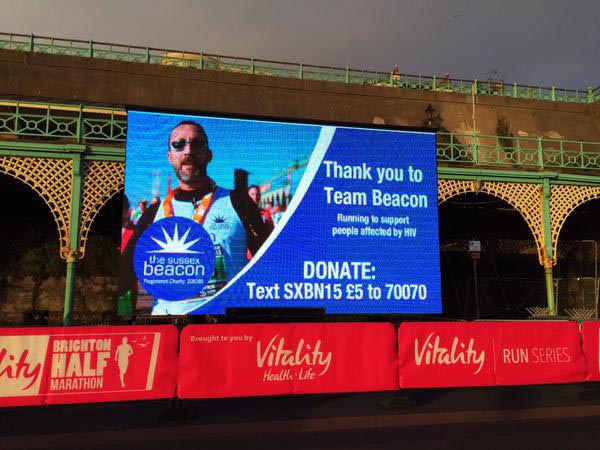 Despite the threat of bad weather, the rain held off for today’s Vitality Brighton Half Marathon, bringing thousands of people onto the streets of the city to support the 15,000 runners and celebrate the 25th anniversary of the 13.1 mile race, which is run around the city’s landmark sights.

THE RACE IS ORGANISED by The Sussex Beacon, a charity which provides a range of services for men, women and families living with or affected by HIV across Sussex. This year’s race field was the largest in the event’s 25-year history, with many local, national and international runners in the race.

In the elite field, Paul Martelletti (Victoria Park Harriers and Tower Hamlets AC) took home his third successive title, shaving four seconds off his winning time in 2014 to finish in a time of 01:05:48, breaking the course record.

Second place went to Kevin Rojas of Brighton and Hove Athletics, who in great form finished with a personal best of 01:06:46.

A last-minute entrant to the field, the Kenyan runner Leonard Bett, took third with 01:08:19.

Alongside the elite field, thousands of charity runners took to the streets, raising vital funds for over 50 charities, including local charities Chestnut Tree House, RISE and Rocking Horse and national charities including Laureus, WaterAid and Scope.

Celebrity runners in the race included Gethin Jones for Leukaemia and Lymphoma Research, while runner George Frogley celebrated his 80th birthday, sporting the race number 80 and running with his daughter.

The race started in 1990 as a small event involving around 200 runners from local athletic clubs and has become an established event for those training for a Spring marathon. To mark the milestone year, all runners finishing the event this year received a special 25th anniversary commemorative medal.

Race Director Martin Harrigan said: “It’s been a brilliant day for running in Brighton today and the Vitality Brighton Half Marathon 2015 has been a huge success. Congratulations to Paul and Julia, to our amazing Youth Race runners and to every runner who laced up their running shoes this morning to join us in celebrating our 25th anniversary race.

“A big thank you also goes to our sponsors, partners, supporters and volunteers, and to everyone who contributed to the success of the 2015 race. Here’s to another 25 years!”

Simon Dowe, CEO of The Sussex Beacon, added: “The Sussex Beacon has been the organiser of the Vitality Brighton Half Marathon since the early days of the race and we are proud to deliver one of the most popular events in the running calendar. The event provides our charity with valuable income that allows us to run vital services for people affected by HIV. The event also provides significant fundraising opportunities for our many charity partners.”

Headline sponsor Vitality was new to this year’s race, which now forms part of the Vitality Run Series, a series of seven leading half marathons and one 10-kilometre race (the 10K London Run) in the UK.