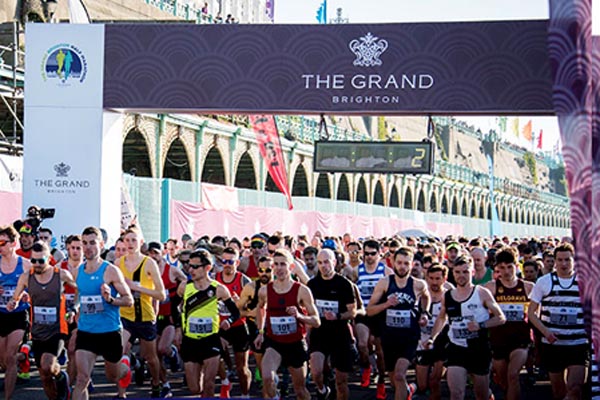 The Grand Brighton Half Marathon has launched entry for its 2020 race, which will be the 30 year anniversary of the major half marathon.

The 30th Brighton Half Marathon will take place on Sunday, February 23, 2020 and organisers say they have some surprises up their sleeves for their big birthday, including a commemorative anniversary medal.

An early bird offer is currently available on entry, and runners have a few weeks to take advantage of the opening offer.

The Grand Brighton Half Marathon’s Race Director, Martin Harrigan, said: “Planning for the race is always exciting, but this year it is even more so as we mark the 30 year anniversary of the event. Running has changed dramatically since the first Brighton Half Marathon and we’re enormously grateful to everyone who has taken part or contributed to the event over the years. 2020 looks to be our biggest race year yet and we’d encourage anyone who is keen to run and help us celebrate the race and running more generally in Brighton and beyond to enter.”

The race has become one of the most popular races in the UK since its first event in the 1990s. The 13.1 mile route takes runners from Brighton’s famous Pier through the centre of the city, before heading along Hove Prom, past Hove’s colourful beach huts and the British Airways i360 viewing tower on the seafront.

The Grand Brighton, the city’s iconic seafront hotel, is once again confirmed as headline sponsor and its famous building also features on the course route.

The race is popular with both beginners to half marathons and seasoned distance runners. As a February event, it is one of the first major half marathons in the running calendar and is a great training event for anyone embarking on a full marathon in the Spring.

The Chief Executive of The Sussex Beacon, Bill Puddicombe, added:
“The Brighton Half Marathon is one of the proudest and most important days of the year for The Sussex Beacon. The race helps us to raise the funds that we need to provide for people living with HIV, who face challenges on a daily basis.

“The 30th year of the event is a great milestone and we know that the race will once again attract runners of all ages, abilities and causes, combining to make this one of the happiest mass participation events in the calendar.”