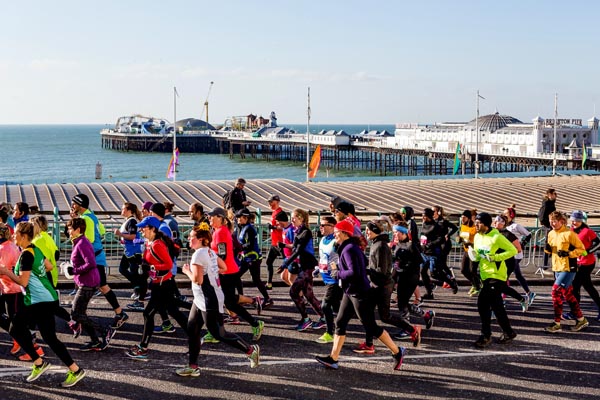 General entry places in The Grand Brighton Half Marathon 2019 are close to selling out – people wanting to run in the race are urged to enter soon to avoid missing out.

THE 29th Brighton Half Marathon will take place on Sunday, February 24, 2019 and features a stunning seafront course which takes in many of the city’s famous landmarks.

Since its first staging in the 1990s, the race has become one of the most popular races in the UK. The 13.1 mile route takes runners from Brighton’s famous Pier through the centre of the city, before heading along Hove Prom, past Hove’s colourful beach huts and the new British Airways i360 viewing tower on the seafront.

The race is popular with both beginners to half marathons and seasoned distance runners and being one of the first major half marathons in the running calendar and is a great training event for anyone embarking on a full marathon in the Spring.

The Grand Brighton Half Marathon’s Race Director, Martin Harrigan, said: “As the race approaches sell out, we’re advising all runners interested in joining us on 24th February to register soon to avoid disappointment. Unlike some other races, we never re-open for general entries so this is a last chance to enter. The 2019 race promises once again to be a great celebration of running in the city and we welcome runners of all abilities and wheelchair racers to our 2019 event.”