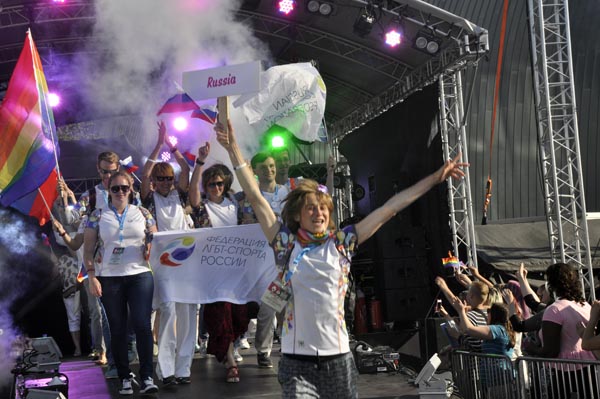 Teams from all over the world descend on Helsinki in Finland to take part in the Euro Games from June 29 – July 2.

The opening ceremony was marred by a very small section of the crowd in the VIP area chanting Brexit, who booed Team UK as they entered the arena. The ceremony was presented by Elisa Koskimies and featured, performances by Krista Siegfrieds, Softengine and Sandhja.

Teams came from all over Europe and further afield including Brazil, United States, Thailand and India to take part in the opening ceremony which was staged in a spectacular purpose built Rainbow Village on Citizens Square in the city centre close to the main train station.  The arena included a main stage, sauna, bars and food outlets. Biggest attraction was the stall selling Tom of Finland coffee beans at 10 Euros a packet.

Most of the sporting competitions are being held today, Thursday (June 30) and tomorrow, Friday (July 1) with the cross-country running event taking place on Saturday (July 2), followed by the Closing Ceremony which is taking place as part of Helsinki Pride.

For more information about the Euro Games, CLICK HERE: