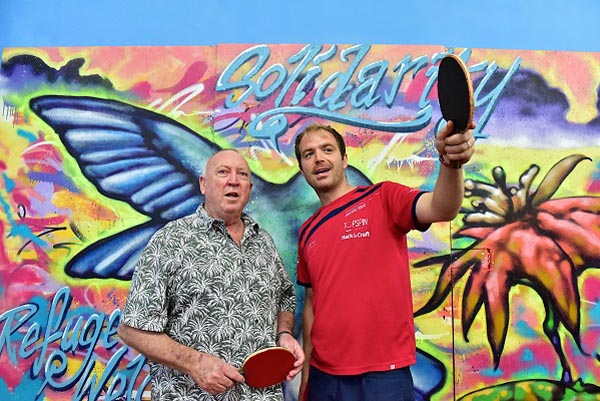 Green MEP Keith Taylor gives his support to Brighton Table Tennis Club for the work it does in the local community after recently visiting the club in Kemptown, Brighton.

BRIGHTON Table Tennis Club (BTTC) is a registered charity giving more than 1,500 people from diverse backgrounds the opportunity to come together to play table tennis each week.

It brings together people with disabilities, young people from the Brighton Travellers site, Over 50’s groups, looked after children, people from the LGBT+ communities and young asylum seekers. BTTC has also become the world’s first recognised Club of Sanctuary for its work with refugees.

Keith Taylor MEP has praised the club for making a difference in the local community and bringing people from all walks of life together. Keith Taylor is the Green MEP for the South East of England and a Brighton resident.

Speaking about BTTC, he said: “Brighton Table Tennis Club is making a huge difference for so many people of all ages from many different countries and many different communities. It works so well because of the absolute commitment of staff and volunteers.

“It doesn’t matter where people playing at the club come from, they all speak the same language: the language of friendship and table tennis”

This support for the club is another boost as they get ready to screen their 30-minute documentary Believe That for the final time.

The film follows the journey of Team Santos (Harry Fairchild, Andrew Tonkin and Chris O’Flinn from BTTC) as they prepare to represent their country at the European Down’s Syndrome Championships.

The final screening of Believe That will take place on August 6 at the Duke of York Picturehouse.