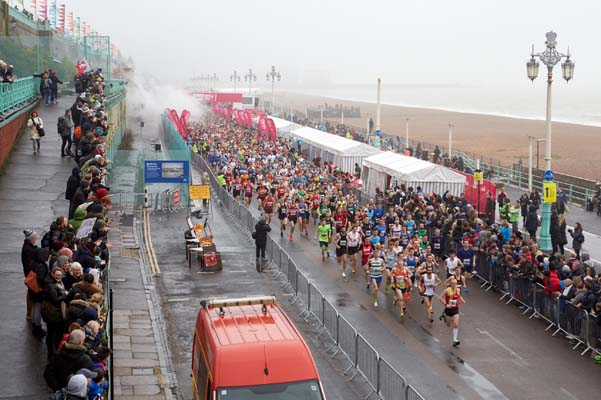 International superstar DJ and Brighton resident Norman Cook starts thousands of runners on their way for the Vitality Brighton Half Marathon 2017.

Norman Cook (aka Fatboy Slim) sounded the starting klaxon to get more than 8,000 runners on their way for the Vitality Brighton Half Marathon 2017 on Sunday, February 26.

The international DJ cheered on runners as they passed the start line on Brighton seafront, before joining the race himself, running with friends for the charity Young Epilepsy.

Blasts of CO2 got the race off to an atmospheric start as runners began their 13.1 mile journey that took in city landmarks including the Royal Pavilion, and the Brighton Palace Pier.

Despite damp conditions early on, hundreds of spectators lined the route to cheer on runners, and crowds were entertained with a host of bands, choirs and stilt walkers along the course, plus a community stage provided by The Grand Brighton.

Now in its 27th year, the race was once again organised by The Sussex Beacon, a Brighton-based charity which provides a range of services for men, women and families living with or affected by HIV across Sussex.

In the main race, the field featured many runners new to the half marathon distance and also lots of runners training for a full marathon. As well as local club runners, this year’s field included participants from Taiwan, the United States and Australia.

The men’s elite race featured a nail-biting finish as Jonathan Tipper from Kent AC closed in on the front pack in the final stretch, overtaking to storm to the finish line in a time of 1:08:37. Stuart Hawkes was close behind in 1:08:43, with Neil Boniface from Horsham Joggers claiming third place.

Course record holder and four times winner Paul Martelletti unfortunately had to withdraw from the race following a last-minute injury but he joined the commentary team to report on the elite race.

In the women’s elite race, Eleanor Davis from Newquay Road Runners stole the show, taking home a course record in a time of 1:14:26, while Emily Proto from Arena 80 followed in a time of 1:21:27 and Sarah Hill took third place in 1:21:32.

Brand-new for 2017, this year’s event included a Wheelchair Race, with eight entrants from around the UK. Rob Smith took first place in the inaugural men’s race, in a time of 1:14:23, while Yasmin Somers came first in the women’s race in a time of 1:49:05.

Alongside the elite field, thousands of charity runners took to the streets of the city, raising funds for over 50 charities, including local charities Chestnut Tree House, RISE and The Sussex Beacon and national charities including Macmillan and WaterAid.

Race Director Martin Harrigan said: “Both the men’s and women’s races were really exciting today – the men’s winner Jonathan Tipper was actually outside of a podium place until the final stretch when he stormed ahead to overtake the lead pack. And we have a new course record for the women’s race, so it was a brilliant day all round. After months of planning, we were also delighted to introduce a brand-new wheelchair race to the Brighton Half Marathon this year and I’m pleased to say it was a fantastic success, with the crowds really getting behind the new race.

“Thankfully the stormy weather we’ve been seeing over the past week stayed away for the morning and it was great to see all the smiles on the finish line as runners collected their medals. We’d like to say a massive thanks to everyone who took part today – the runners and also all the volunteers who work so hard behind the scenes to make Brighton Half such a great event.”

The race forms part of the Vitality Run Series, a series of seven leading half marathons and one 10K in the UK.