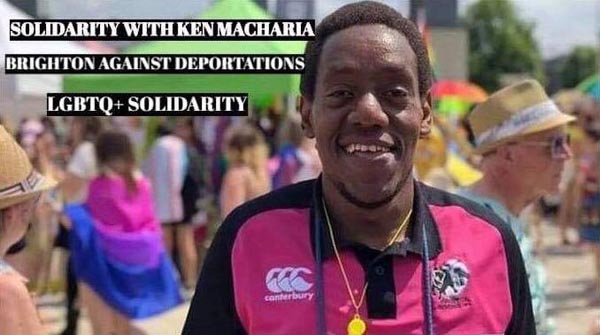 Kenneth Macharia, a gay rugby player from Bristol, faces imminent deportation to Kenya, where he will face serious danger of harassment, blackmail, and sexual violence, as well as up to 21 years in prison.

KEN, a UK university graduate, sought political asylum after his student visa ran out. However, his appeal was rejected and he is due to be deported to Kenya, despite the high risk of homophobic persecution that he will face there.

Ken is a “high profile homosexual man” in Kenya and the Kenyan media repeatedly targets him, resulting in cruel harassment.

Last week, the High Court in Kenya ruled to uphold homophobic laws that would mean a prison sentence of up to 14 years for homosexuality. It is not safe for Ken to live in Kenya. He wants to remain in the UK with his friends and family, and continue to work and contribute to our society, as he has done for the last nine years.

Today, Ken is due to report to a police station in Bristol and will most likely be forced to leave the country.

Brighton Against Borders‘ in collaboration with LGSMigrants Brighton have organised an awareness raising standing demonstration at the Clock Tower in central Brighton from 5.30pm-6.30pm.

For more info about the Brighton demonstration, click here:

Go along to show solidarity with Ken, as well as all asylum seekers and LGBTQ+ peoples. Wear pink, the team colour of Ken’s rugby team the Bristol Bisons RFC who are also organising a demonstration at 11am this morning outside Bridgewater Police Station, TA6 4RR, Bristol. It’s very likely that Ken will be detained there, so as many people as possible need to turn up to show him support.

How can you help Ken?