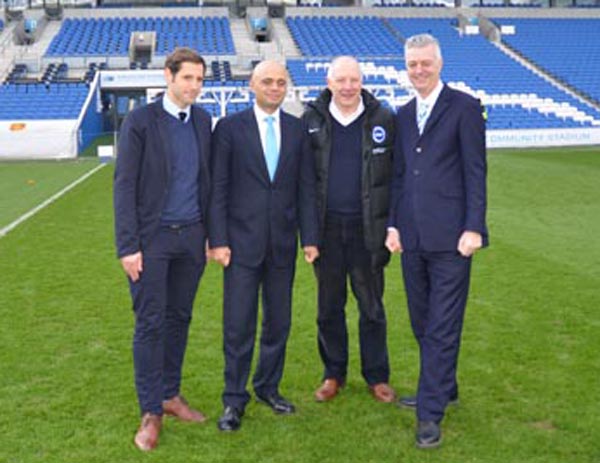 MR KIRBY showed the Secretary of State round the American Express Community Stadium and discussed the Rugby World Cup games to be held there later this year, and they met with Albion in the Community.

The Kemptown MP campaigned to bring these games to Brighton, lobbying the governing bodies and meeting with the RFU to put the case in person.

Finally, they both met with Michael Edwards, the CEO of Albion in the Community, the charitable arm of Brighton and Hove Albion FC, to hear about the important work that they do in the local area, before ending the visit by taking a tour of the Club Museum.

After the visit, Mr Kirby said: “I was delighted to bring Sajid Javid MP to Brighton Kemptown and Peacehaven and to show him around the fabulous facility that we have in the American Express Community Stadium.

“We discussed my successful campaign to bring Rugby World Cup matches to Brighton and how this will provide a huge boost to the local economy. The Minister also learnt about the Club’s long history during our visit to the Club Museum.

“The Secretary of State’s visit was a fantastic opportunity to fly the flag for Brighton, and also for him to hear about the great work that Albion in the Community do in the area.”

Commenting on his visit, Sajid Javid said: “I was really pleased to accept Simon’s invitation to visit the AmEx stadium and hear more about the fantastic community work Brighton and Hove Albion do, which he has told me so much about.”