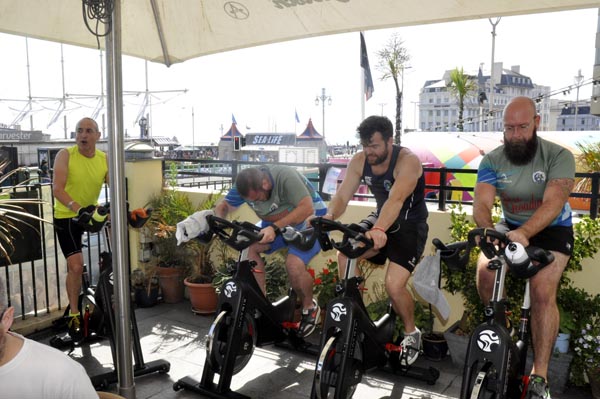 Players and supporters of Brighton & Hove Sea Serpents take turns to cycle 500 miles to raise funds to send a team from Brighton to the 2020 Bingham Cup in Ottawa, Canada.

THE cycle ride took place on the afternoon of Sunday, July 21 on the patio of the Amsterdam Bar and Kitchen on four static cycles loaned by Pure Gym.
The Bingham Cup is the world cup for Gay and inclusive Rugby Teams worldwide and in 2018, at the last Bingham Cup staged in Amsterdam the Sea Serpents won the Challenger Bowl.
They need to raise £2,000 to help defend the trophy in Ottawa and the static cycle ride is one of a number of fundraisers they have planned during 2019-20.
Brighton & Hove Sea Serpents RFC was set up in 2015 with the aim of giving Gay Bi and Trans men the opportunity to play rugby that many of them missed whilst at school.
They are the youngest Rugby Club in Sussex and 2018 has been their first year playing in the Sussex 4 East Division.
The Sea Serpents are the current holders of the Golden Handbag for Favourite Sports Team and are sponsored by Bar Broadway.