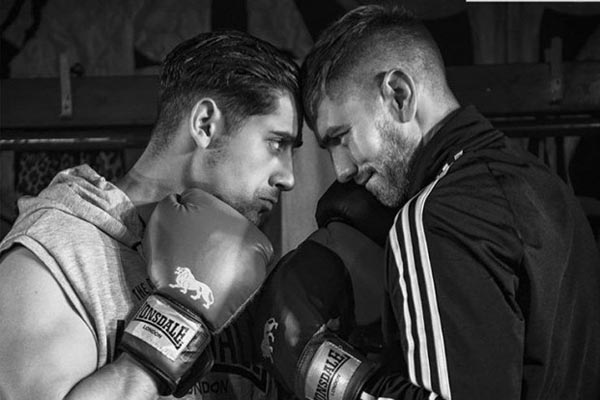 The central theme of this fast-moving two-hander is “How can a boxer be gay?” And playwright and co-star Rob Ward answers his own question in this highly poetical episodic drama – “yes he can”.

ORIGINALLY conceived as a response to the 2014 Winter Olympics in Russia, the piece has evolved into a taut and very moving, tender, elegiac look at gay romance, uncertainty, fear, guilt but ultimately a love story with a semi-happy outcome.

Rob not only plays Gorgeous George  the scrappy little mongrel of an aspiring boxer, but many other roles, each portrayed in the fastest of costume and character changes. Equally John Askew as the openly out gay contender plays mother, girlfriend, thuggish cousin in the same high-speed manner.

It has to be said that neither actor particularly has the physique of a boxer – Askew has finely sculptured features that make him look more like a high-class swimmer than a fighter. But that aside they both go through simulated fights which work.

Director Adam Zane keeps the pace at a prize-fight speed and there is never a dull moment in its 65 minutes.

The actors used the tiny space well and their locker-room sexual encounter is handled tastefully and powerful.

As another minor gay character says in the play; “I’m fabulous and I’m not going to hide it.”

The play doesn’t paper over the difficulties of being gay in a macho homophobic sport and the dilemma of Dane The Pain Samson is transmitted with passion and humour.

Though some dialogue is predictable and a little clichéd, it is ultimately a gay-life affirming play and deserves to be seen wider.

Gypsy Queen is at the Marlborough Theatre tonight (9) and tomorrow, May 10.