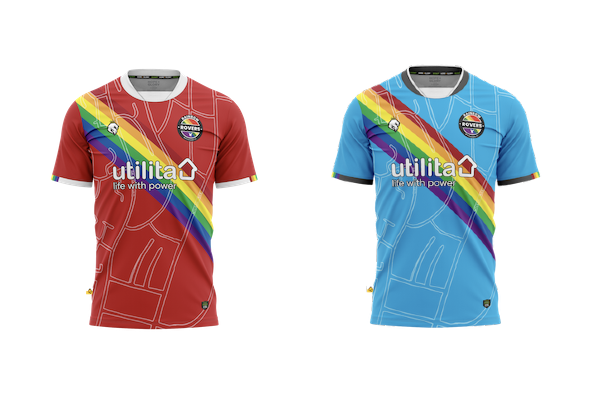 Rainbow Rovers, Whitehawk Football Club’s LGBTQ+ team, has begun its campaign for the 2021 season with a new Eco-Kit, a new website, and the announcement of its first match of the year.

The team, comprised of some of the best LGBTQ+ players in the country and managed by Dr Sophie Cook HonDLitt, FRSA, writer, speaker, broadcaster & diversity champion, will take on an all star ex-professional team in partnership with team sponsors Utilita, in Football United 2 on Saturday, August 7, 2021, which kicks off at 3pm. Tickets: £5 for an adult and £2.50 for children under 16. To purchase, CLICK HERE.

The first Football United game took place on Brighton & Hove Pride weekend in 2019, and was cancelled in 2020 due to the coronavirus pandemic.

The new Eco-Kit, made from recycled plastic bottles, has been provided by Whitehawk FC’s new sportswear provider, Hope & Glory Sportswear, and designed by Turner Prize artist and one of the most popular visual artists in the country, David Shrigley OBE. For every Rainbow Rovers shirt sold, Hope and Glory’s partners One Tree Planted will plant one tree.

The team also unveil its new website, designed by Rover’s back of shirt sponsors Huxley Digital, which features Rovers’ news, player profiles, details on how to purchase the new shirt, and how to purchase tickets for the big match in August.

The team is really excited to re-launch its campaign, as Dr Sophie Cook explains; “When we originally launched Rainbow Rovers back in 2019 no one believed that our ambitious idea of a team of LGBTQ+ players could take on, let alone beat, a team of ex-professionals and yet here we are two years later with one of the highest profile LGBTQ+ sides in the country.

“For our players, many of whom had expressed difficulty being involved in the game previously due to their sexuality or gender identity, it was the experience of a lifetime to walk onto the pitch at the Enclosed Ground alongside players that they had followed for their entire lives.

“Since I came out as transgender at AFC Bournemouth back in 2015 the game has taken great strides forward towards LGBTQ+ inclusion with support from all levels of the game. Unfortunately there is still more to do and I hope that Rainbow Rovers plays a small part in showing people that bigotry and abuse within the beautiful game and that football really is for all.”

Kevin Miller, head of commercial and marketing and the club’s liaison for Rainbow Rovers, added: “We are absolutely thrilled to be able to announce so many exciting things for Rainbow Rovers! The kit looks incredible; probably one of the coolest designs I’ve seen for years, and the website looks absolutely magnificent!  Huge thanks to Dom and his team for his patience in difficult circumstances, and to Utilita for helping us drive our joint message of inclusion across the country.

“We can’t wait to host the game again, and call upon all of the football community to embrace the team, and celebrate diversity!”

The launch is dedicated to Rainbow Rovers player Leviathen Hendricks who passed away recently. A tireless campaigner for increased diversity in sport, he was a member of the original Rainbow Rovers squad despite telling manager, Sophie Cook, that he “hadn’t really played much football”. Despite his limited playing experience he was a central member of the squad enchanting everyone with his infectious enthusiasm and seemingly permanent smile.