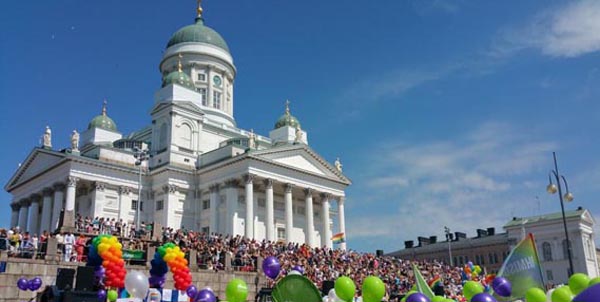 Following a week of cultural and human rights events, Helsinki Pride drew to a climax on Saturday, July 2 with a colourful march through the city centre.

Official police estimates put the numbers of people marching at 30,000 with a larger crowd than usual attending as athletes from all over the world attending the Euro Games, also being staged in Helsinki, joined in the march. Many thousands lined the streets of Helsinki to watch the march go by.

With a perfect blue sky for a back drop, LGBT+ organisations from all over Finland marched behind their group banners, many with political statements on them, from Senate Square to Citizens Square, home to the athletes village during the Euro Games, for a joint closing ceremony of the Games and Pride.

Police reported no trouble on the march which has in the past been attacked by protestors using tear gas and pepper spray.

Brighton was represented on the march by players from BLAGSS football team who had played in the Euro Games Football Tournament.