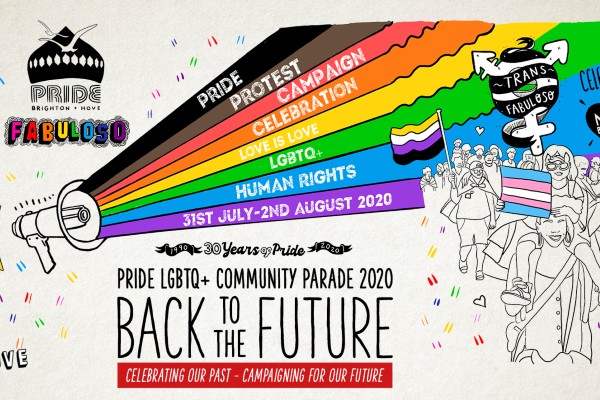 Pride announces LGBTQ+ community parade theme for 2020, “Back to the Future.”

Pride have announced the theme for this year’s community parade event and applications to take part are now open.

The annual Pride Community Parade is the biggest, most anticipated and exciting visual event in Brighton & Hove’s calendar, it is also one of the best attended parade events in the whole of the United Kingdom. Each year Brighton and Hove Pride brings the whole community and many more besides out on to the city’s streets with over 400,000 participants. This year looks to continue in the same vein as Brighton Pride celebrates its 30th anniversary this year with the parade event taking place on Saturday August 1st 2020.

The theme for the LGBTQ+ Community Parade for 2020 will be ‘Back To The Future’ building on last year’s ‘We Stand Together’ campaign, a celebration of the 50th anniversary of the Stonewall uprising that ignited the global Pride movement. Live commentary of this years parade was broadcast on a special four hour programme on BBC Sussex, presented by Allison Ferns with accompanying presenters broadcasting from within the parade itself. Allison’s daily lunchtime programme is nominated in this year’s Audio and Radio Industry Awards as Best Local Radio Show and will return to the Pride event in August 2020.

Pride describe this year’s theme as “reaffirmation of our commitment to campaign for global LGBTQ+ equality”. The theme ‘Back To The Future’ aims to celebrate the pioneering activists of our broadening communities’ past as well as looking to the future and the continued strive for equality for LGBTQ+ people all over the world.

Since Pride’s conception as a CIC, it has raised over £922,000 for the Rainbow Fund, the Pride Social Impact Fund, Pride Cultural Development Fund and new Pride Solidarity Fund in the last six years.

The Rainbow Fund has in its short history become a much celebrated organisation with its remit to receive donations and use them to give grants to LGBT and HIV groups and organisations in Brighton and Hove. The Pride Social Impact Fund benefits local good causes giving grants to a range of local groups.

The parade ‘Back To The Future’ theme aims to encourage intergenerational conversations and consequently a recognition of the heroes and icons that paved the way for the rights we celebrate today.

This year there will be a judging panel of local creatives and dignitaries awarding prizes for those taking part in the parade in categories which include Best Creative, Best Costumes, Best Global LGBTQ+ Theme, and Best Use Of Recycled Materials.

In Autumn last year Pride announced the theme for the Pride events in Preston Park was Fabuloso’, and it is hoped this celebratory approach will also influence choices made by community groups taking part in the 2020 parade. Ahead of applications for 2020, Pride issued a statement: “Each year we are really excited to see some of the innovative and spectacular creations parade entrants come up with to interpret our theme and whilst on every other weekend of the year a feather boa and a rainbow wig might suffice, for Pride 2020 we really hope that they pull out all the creative stops to ensure their group stands out and gets it message out. And there is also the prestige their group could win its category.

For more information and to apply, please visit the Parade page on the Brighton Pride website