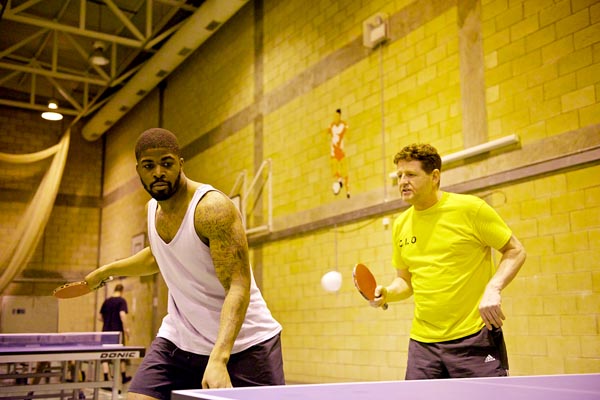 HM Prison High Down in Banstead has seen a reduction in violence among inmates that are taking part in sessions run by Brighton Table Tennis Club.

♦ An 83 per cent reduction in incidents of violence among High Down inmates who have taken part in the table tennis sessions.
♦ A 14 per cent increase in the number of inmates employed in prison jobs since the table tennis project started.

According to High Down staff: “Table tennis participants have been involved in significantly fewer incidents relating to drugs and violence since starting the programme.”

“Table tennis acts as an incentive for good behaviour,” they add. Prisoners are “holding it down,” said one staff member, knowing that they will not be allowed to take part, if they behave badly.

One prisoner was asked to give further details of the significant changes that table tennis has made.

He said: “It has made me want to keep my enhanced status and stopped me from getting any red or negative entries as I would not be able to attend the sessions if I did. Thank you to the Brighton Table Tennis Club and High Down PE team. 10 out of 10.”

With endemic drug use among inmates and violence on an almost daily basis, this is important progress in a prison which was found to be “in a volatile state” earlier this year by an Independent Monitoring Board.

Professor Rosie Meek praised Brighton Table Tennis Club in her recent report on sport in prisons for the Ministry of Justice, which concluded that sport can play a huge and positive role in prisons:

She wrote: “As well as being a way to bring together disparate groups, develop communication skills and learn life lessons, it also has the advantage of being something many people are passionate about.

“It can be a relatively straightforward way to encourage otherwise reluctant individuals to engage in a whole raft of associated activities, while also serving to improve mental and physical health, reduce violence, and tackle reoffending.”

Tim Holtam, director of Brighton Table Tennis Club, adds: “We are developing a table tennis model that we hope can be rolled out in other prisons. It is certainly producing results in High Down and Downview women’s prison, where we also work.

“At both prisons we have extremely good relations with both staff and prisoners. Prisons Minister Rory Stewart has announced an extra £10 million to improve conditions in ten prisons facing acute problems with drugs and violence. I urge him to consider support for table tennis and other sports in his plans.”

Brighton Table Tennis Club (BTTC), a community club and registered charity is open seven days a week to players of all ages and abilities. It is located at The Fitzherbert’s Centre, Kemptown, and holds weekly sessions for a wide range of groups, among them primary school children, under 16s, 60+ players, people with learning disabilities, homeless people, looked after children and Traveller children.

Two women-only sessions are held each week and one for people from the LGBT+ communities.

BTTC was awarded Club of Sanctuary status by the international City of Sanctuary network for its work with young refugees in Brighton and Hove. It is the first club in the world to receive this award.