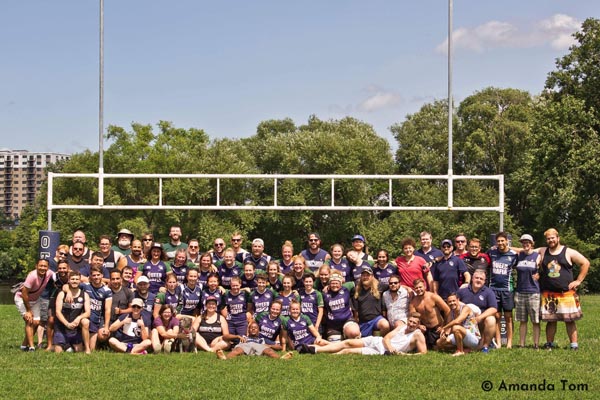 The Bingham Cup 2020 will be hosted by the Ottawa Wolves in Ottawa, Canada.

THIS will be the first Bingham Cup to be staged in Canada and the Ottawa Wolves are preparing to host upwards of 70 teams from all five continents of the world in the nation’s capital.

Bingham Cup 2020 will be celebrating its 10th edition and is now one of the largest 15-a-side rugby tournaments in the world.

Mendoza withdrew from the bidding process following issues associated with confirming the hosting facilities and following a vote amongst the 77 members of IGR, Ottawa Wolves were approved as the next hosts for IGR’s flagship tournament.

IGR Chair, Ben Owen, said: “The international gay rugby community is extremely excited that the Bingham Cup will be held in Canada for first time – a country with a growing rugby community and a proud reputation of openness towards the LGBT+ communities. The Ottawa Wolves are one of IGR’s most active and successful clubs, having competed in every Bingham Cup since their creation including the first women’s competition at the Bingham Cup Amsterdam 2018.

“This vote reflects the excellence of their bid and our confidence that they will deliver an outstanding rugby tournament with a legacy that lasts long after the final whistle is blown, both in Canada and amongst the IGR community.”

Jean-Francois Laberge, President of the Ottawa hosting committee said: “We are overjoyed at the news! After our first Bingham in Minneapolis, the Ottawa Wolves committed as a club to bid for the Bingham Cup in 2020. In the ten years since, we have worked tirelessly to put the pieces in place to honour that commitment.

“We spent countless hours with our partners over the last year developing a bid that would uniquely celebrate the legacy of the IGR movement and the Bingham Cup. At the same time, it was really important for us to ensure that we delivered the most affordable, inclusive and accessible Bingham Cup ever. There was no compromising on this: we wanted all of the members of the IGR family, their friends, their fans and their loved ones to be able to experience a truly world-class and uniquely Canadian tournament experience in our nation’s capital. See you all in Ottawa in 2020!”

The tournament is named after Mark Bingham, a member of the San Francisco Fog team who died on United Airlines Flight 93 on September 11, 2001. Mark is credited as one of the passengers who tackled the terrorists on-board, preventing the aircraft from reaching the hijackers’ intended target.

The Bingham Cup is held in honour of Mark’s memory and challenges stereotypes and perceptions of the LGBT+ communities.

Ian Chaplin, Chairman of Brighton based Sea Serpents RFC, said: “We in Brighton and Hove are delighted that the Bingham Cup is moving forward, to another country, this time Canada. I attended the first ever tournament in San Francisco in 2002 and it thrills me to see how big and vibrant it has become, not just because it is a real memorial to Mark Bingham, but also because it underlines the fact that gay, bisexual and transgender men can play team sports, for fun at a high standard.  I look forward to a strong team from Brighton and Hove travelling to Ottawa and showing to ourselves, to our friends in rugby from around the world and to our friends and supporters at home how our Club fulfils the RFU principles of teamwork, discipline, enjoyment, sportsmanship and respect.”