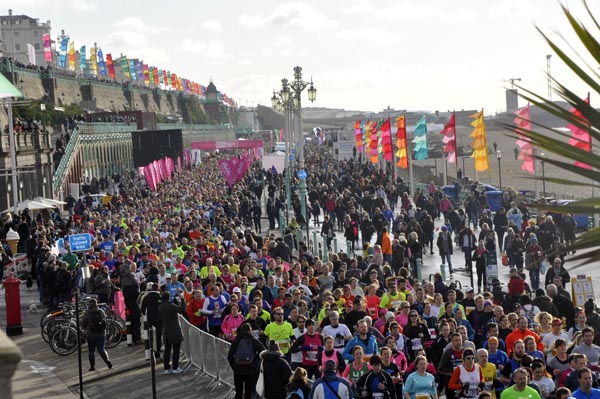 Norman Cook – aka Fat Boy Slim, one of the city’s most famous residents, will sound the starting claxon at 9am on February 26, 2017 to get the 13.1 mile race around the city underway.

A keen runner himself, Norman is very familiar with the 13.1 mile route, as he has run the race on numerous occasions. In 2016, Norman ran for the charity Young Epilepsy and in 2017 he will once again run the race, after his official race starter duties have ended.

2017 marks the 27th year for the Vitality Brighton Half Marathon and this year the race has the largest field in its history, with close to 13,000 runners set to take on the challenge of a half marathon.

Norman said: “As a keen runner, Brighton local and seasoned Brighton Half Marathoner, I’m hugely looking forward to starting the Vitality Brighton Half Marathon 2017. The race is renowned for its buzzing atmosphere and each and every year the crowd support throughout the route is just fantastic. The race really brings the city together. It’s great to see so many people – especially those new to running and those running for charities – taking on the challenge of 13.1 miles. Bring on February 26!”

Martin Harrigan, Race Director of the Vitality Brighton Half Marathon, added: “We’re thrilled that Norman Cook will sound the starting claxon this year to get runners on their way around the city. He’s been a big supporter of the race for years, so it’s brilliant to have him waving runners on for their half marathon journey. We’ll make sure he conserves his energy though as he’ll be joining the crowds to run the race himself!”

Standard entries closed over the summer, but runners keen to enter can still sign up to run for charity. Charity places close on Sunday, January 29.