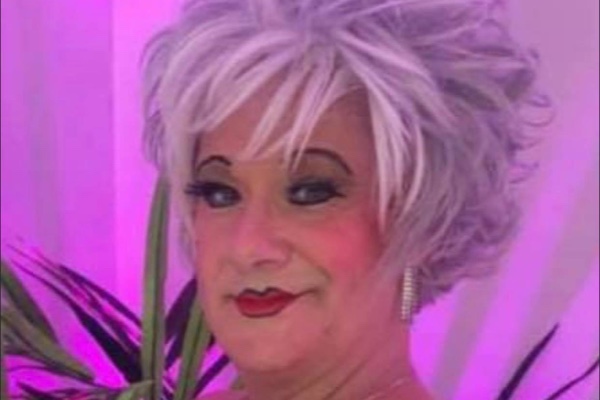 Popular cabaret artiste Miss Jason has been told by doctors to rest after a brain tumour was discovered that affects the hearing in the left ear. The stalwart of the scene who has been delighting pub, bar, theatre, TV and Pride audiences for more than 20 years now has tinnitus which also affects balance. Known off-stage as Jason Sutton, he awaits the outcome of tests with the support of his partner Terry Ward.

“We are waiting to get the MRI scan completed” Terry said. “He has gone through lockdown and was already pretty down about it anyway, he wanted to get back to work. The ban on performances was lifted and drag queens have started performing, but that is not possible for him at the moment. So he is very down but wants to get it sorted sooner rather than later.”

A fundraising page has been set up by Ollie James-Parr, a player of the LGBT football team London Titans, which is sponsored by the Two Brewers bar where Miss Jason often performs in London. He said: “Miss Jason is a pillar of the LGBTQ+ community, having entertained crowds nationwide for decades. Right now she needs our help to recover from a debilitating illness so that she can return to the stage, where she belongs. Three weeks ago she went deaf in her left ear. Following medical examination it was confirmed that Jason has a tumour which has killed off the localised nerve endings and the only treatment is with hearing aids. Jason is currently suffering with terrible tinnitus, affecting her ability to listen and concentrate hugely. Understandably this has also had a knock on effect on her balance. This has been a huge shock to Jason, as the condition happened overnight and, financially, the hearing aids are not viable with her not having worked since March.

The Two Brewers, London Titans FC and many other bars, clubs, community groups and patrons want to show their support for Jason. Any amount you are able to give is greatly appreciated and, once the fundraiser is completed, all donations will be given directly to Jason in order for them to get the hearing aids.”

Terry Ward said of Jason “He has to spend a lot of time resting but he has has had so much support from everyone. It was so surprising when they set up the fundraising page. We are so pleased with the donations people have made.”

You can support  this appeal and help Miss Jason here