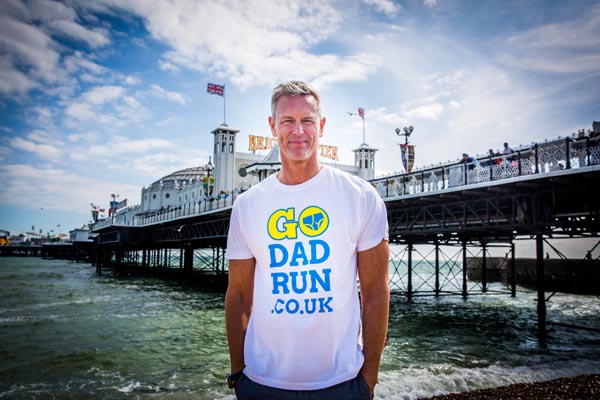 Mark Foster burst on to the international swimming scene at the age of 16. He went on to represent his country at the highest level for twenty-three years and is Britain’s most decorated male swimmer.

Since retiring from swimming Mark has become a familiar face on television and a household name. He is a successful motivational speaker, business man and male model, but he is also a founder and face behind the charity Go Dad Run, which comes to Hove Park on 25 June to raise funds and awareness for men’s health causes.

Mark met up with Paul Gustafson to talk about a charity close to his heart, and to chat about himself and his evolving and diverse career.

On Sunday, June 25 this year you’ll be in Brighton and Hove as an Ambassador for the Sanlam Go Dad Run. Can you start by telling us a bit about the event and what your role as an ambassador will involve?

“I started the first Go Dad Run with Colin Jackson back in 2013. We both knew people who were affected by prostate cancer and Colin sadly lost an uncle. One in eight men in the UK will develop prostate cancer but many are often reluctant to talk about it. We saw the great work Race for Life was doing with women only events in the fight against cancer, and we wanted to develop something for men. The Go Dad Run events aim to raise awareness of men’s health issues and to get men talking early on if they think may have any symptoms. We also want to help raise funds for the charities involved.”

And you’ll be in Hove Park for the Brighton event?

“Yes. This year we’ve grown to a series of 5k and 10k runs across six UK cities. Prostate Cancer UK is still our lead charity, but this year you can also raise funds for Bowel Cancer UK, Orchid, which fights testicular, prostate and penile cancers,  CALM, a men’s mental health charity, and for the Brighton and Hove runs you can also fundraise for a local charity, Martlets Hospice, which provides terminal care for local people in Sussex. Previously some people were approaching us saying they loved the idea of the Go Dad Runs but did not have a direct link to prostate cancer, so we’ve opened it up to other partner charities as well as a local charity in each event region.”

Is the event open to all abilities?

“They are runs rather than races – for men and boys of all ages. Of course some people will want to run competitively, but the emphasis is on doing something healthy, having fun and raising awareness and funds.”

Will you be running?

“I’ll be there from the start to support, but I won’t be running on the day as I need to be there at the finish to hand out medals!”

Why do you think many men aren’t very good at monitoring their own health and talking to family, friends or health professionals if they are concerned about symptoms?

“I think it’s partly the way men are, whereas women tend to be much better at confiding  or having check-ups.  It’s a key thing we want to change. With men it might be due to awkwardness about opening up, or maybe a macho thing, or maybe in some cases down to fear.  I think often men will deal with health issues up to a certain level, but then might struggle to get beyond that in terms of processing their feelings and communicating them.”

To me that’s a great thing about the Go Dad Runs – the context is sport, which a lot of men love and are happy to engage with, and then the whole comedy Y-fronts over your running shorts thing introduces a level of humour about men’s bits that breaks the ice and confronts the taboo.

Trying to live a more healthy lifestyle is an important factor in reducing the impact of these men’s conditions. You were a world-class competitive athlete for 23 years, and since retiring you’re still famed for your dedication to fitness and your fantastic physique. What top tips would you give to our readers for staying fit and keeping in shape?

“I think a lot of it is about moderation. We all like to go out, have a good time. We all eat the wrong foods from time to time. I do myself, but I exercise every day to keep in shape. I would say to your readers to be moderate in what they eat and drink, do plenty of exercise but also set yourself goals, whether it’s running a marathon or going to the gym a couple of days a week, or even just going for a long walk.”

Anything else? What about dancing?

“Dancing is great for fitness. After Strictly and the tour I teamed up with Natalie Lowe and Ian Waite, dance professionals from the show, and we formed Fitsteps. It’s a dance and fitness programme that incorporates different types of ballroom steps to create a fun and energetic way to keep fit. We launched Fitsteps in 2014 and today you can get involved in towns and cities across the UK.”

We see you a lot on TV and in the wider media, and you have a lot of projects going on – in some ways you’ve re-invented yourself.  But it must have been strange and difficult when you finally retired from competitive swimming. We’ve talked about how you’ve kept very fit physically, but how was it adjusting mentally once you retired?

“Mentally it was challenging and a huge change for me. But I thrive on challenges and on learning and doing new things. I started doing punditry and then presenting. People say that I’m good on TV, and that I’m relaxed, and I say I just talk. But the thing is that sense of being at ease came from doing it, learning it, doing it, learning it. The more I did it the more I learned and the better I got. And then from being a pundit I’ve moved on to do motivational speaking. I learned something and took it forward. That mind-set has been my approach since I retired from competitive swimming. I’ve always been a doer but beneath that for me it’s about developing a mind-set for success.”

So it’s great that the Go Dad Runs are now partnered with a specific mental health charity?

“It’s great to have CALM on board. Having a procedure like a prostatectomy, for example, can save your life, but after the operation many men are left facing things like impotence and incontinence which can have a huge psychological impact, but there’s not always the mental and emotional support there. It’s great that we can help do something about this.”

What do you to do relax? Do you have any passions or hobbies?

“I play a lot of golf. For me it’s a walk, fresh air, banter, whether with mates or maybe at a corporate event. It’s also the challenge of getting a small ball into a small hole that’s a long way away. I’m trying to get my handicap down. I always want to get better. It’s just like when I was swimming. I also like cycling and every year I do my own London to Brighton cycle ride with a bunch of mates to raise money for charity.”

What about things like music? Do you have a favourite kind of music, band or artist?

“If I had to choose a genre it would be 80’s music. I’m a bit of an 80s fiend. As a kid I remember listening to 80’s music and now I’ve ended up meeting people like Martin Kemp who’s become a friend, as well as Heather Small from M People and Leee John from Imagination. All of a sudden I became a part of their world, which is very bizarre as they were the ones I used to watch on Top of the Pops. Otherwise I like current acts like Christine and the Queens. And I like Elbow a lot.”

As well as being a respected sports pundit and journalist you’re well known for celebrity TV shows, from Strictly Come Dancing to Come Dine with Me.  Do you have a favourite moment from the shows you’ve been in?

“They were all very good experiences for lots of different reasons. I did Come Dine With Me with a load of athlete friends of mine and yes we wanted to win but at the same time it was more of an entertainment show. Strictly was an awful lot of fun getting a professional dancer to teach me.”

Do you think you’re a better cook or a better dancer?

“A better cook.  I don’t think I’m a good dancer. I can do it and I learned an awful lot on Strictly, but I really like cooking. You’re not on display in the same way as with ballroom dancing.  I enjoy cooking for friends and of course I cook all the time for myself.”

“Anne Robinson. Craig is a big sweetheart who plays a character, a pantomime villain, but in reality he’s a wonderful, lovely, easy-going person. Joking aside Anne Robinson is lovely too. They’re both playing a role. In fact when I did the weakest link Anne just kept flirting with me and I went on to win it!”

It’s good to give the brain a good work out too. I’m a bit of a scrabble nerd and I like watching Countdown. Did you get many nine letter words when you were in Dictionary Corner?

“No but I did get a few sevens and got an eight once. But I’m good at maths and got a lot of that stuff right.”

Apart from the Go Dad Run on June 25, where else can we look out for you in the near future?

“I just filmed a documentary for ITV called The Full Monty, where celebrities including myself, Harry Judd from McFly, Wayne Sleep and Dom Littlewood are put together in a performance to help raise men’s awareness around prostate and testicular cancer. We were trained by Ashley Banjo and Alexander Armstrong is the compere. At the start we didn’t know each other that well, though we each have a backstory connecting us to one of the cancers. In the programme we go on a journey which leads to us stripping off on stage at the London Palladium in front of two and a half thousand people.”

And do you do the full monty?

Anything else to watch out for?

“At the end of July I’ll be commentating at the World Swimming Championships in Budapest alongside Rebecca Adlington. Oh, and I filmed a bit for a movie the other day which comes out next year. It’s a feel good movie and it’s my first film role. I can’t  say much more about it at this point.”

Mark will be at Hove Park on Sunday, June 25 for the Sanlam Go Dad Run.

Registration is open on the day from 9am in Hove Park.