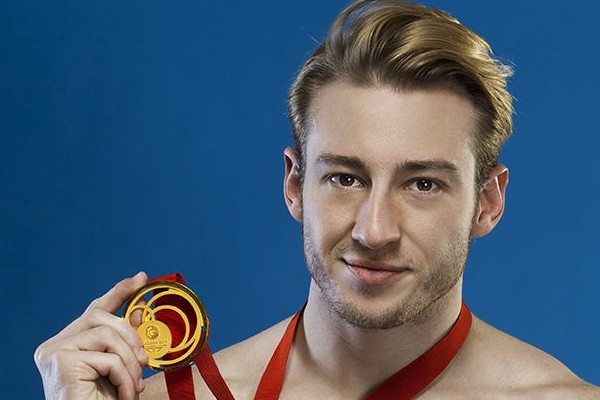 Matthew Mitcham is in a happy place, married to the man he loves and embracing sobriety. The journey to self-acceptance has proved challenging for the Olympic Gold winning diver. Life at his  Catholic convent primary school left him feeling ashamed of his sexuality. “”I was so scared of it that I would actually tie a rubber band around my wrist and every time I had a gay thought I would snap it, to try and associate pain and suffering with the gay thought. To try and train myself out of being gay,” he told BBC Sport as part of LGBTQ+ History Month. Finding escape in diving, he grew to resent the sport where he presented as somebody he wasn’t.”I felt stuck not being able to be authentically me,” he says. “I didn’t want to admit I’d deceived people and lied for so long, which left me feeling alienated. Diving became this darkness which permeated the rest of my life. I really hated it, but I knew it was my one chance to be special, so I kept going, effectively on autopilot.”

As a teenager Matthew became depressed and he would self-harm, take drugs and binge-drink.”I would literally block my nose and drink, drink, drink because the aim wasn’t to get drunk, it was to throw up and pass out quicker than I did the week before,” he recalls.”It was relief, escapism and a way of shutting my brain off for a few hours, but it kept escalating”. He left diving at 18 but returned aged 20 when offered a chance to compete in the Beijing Olympics. He cut out the drugs and alcohol and felt more confident of his identity as a gay man having being embraced but the Brisbane, Australia LGBTQ+ community. At the 2008 Olympics he set an Olympic record for his dive and won gold.

Prior to the dive of his life he gave an interview where he outed himself saying that he lived with a boyfriend. In doing so he became the first Olympian in history to come out as gay.  “I was scared about the response, but going into the Olympics I didn’t want the Australian public to think of me one way – as straight – and then have to come out afterwards, feeling like I’d lied to them,” he admits. “I thought it might mean I had no supporters, but the response was fantastic and I gained this enormous colourful worldwide community. It’s honestly the best decision I’ve ever made.”

But the “amazing high” of winning lead to a severe case of the “Olympic blues” and he lapsed into addiction including to crystal meth. He considered suicide before checking himself into rehab. Having managed his struggles Matthew  looks back on his journey with more forgiving eyes.”There have been other Olympic gold medalists since, and my Olympic record will be broken one day, but no one will ever be able to take away the fact I was the first openly gay male Olympic champion,” he said.”It was the most amazing feeling and my proudest achievement.”

In February 2020 he married  Luke Rutherford who is British. “ I’m really happy with how my life is, not least because I got married last year, so I’ve got a husband and he’s really good looking,” says Matthew.“I’ve been hard on myself throughout my life, but I look back with kinder eyes now, and I’m proud of not only what I won but being able to do it all as an openly gay man, because of the oppression that is still felt in so many countries around the world.”

The Tokyo Olympics were postponed in 2020 due to covid-19. Public health officials and games organizers in Japan are in discussions as to whether  the delayed games can go ahead this summer.

For support with addiction in Brighton and Hove contact  changegrowlive