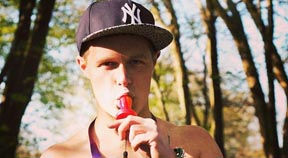 This year he decided to take on one of his biggest challenges yet and probably the scariest.

On August 9, Keith will fly out to the Caucasus mountain range in southern Russia to attempt to scale Europe’s highest peak, Mt Elbrus, standing at 5642m or 18510ft.

He is undertaking the challenge because he loves the thrill and freedom climbing brings him and he wants to raise as much money as he can for Stonewall.

Stonewall is renowned for its campaigning and lobbying for equality for LGBT people in the UK and worldwide. Keith strongly believes all people should be made to feel equal no matter what their sexuality, race or religion.

He started climbing mountains in 2011. His first one was Kilimanjaro in Tanzania, Africa’s highest peak.

At this point in time Keith was still in the closet to a lot of people but as soon as he reached the summit of that beautiful mountain he realised it was time to come out.

Keith said: “I realised if I had the strength and determination to climb mountains, I could easily tell the world who I am and who I love, so on the day I got back to England I went and visited the guy I had been seeing and asked him out. He said yes. I then casually walked in to my house and told my family he was my boyfriend and 5 minutes later declared it on Facebook as you do these days.

“The reason it took me so long to come out was because I didn’t feel equal to my peers, because I believed being gay wasn’t normal because of the teasing of gay people I saw in school and the negative language used in a lot of places I worked.

“I felt too afraid to tell people I was gay and it took me doing something extreme to accept myself. So by fundraising for Stonewall, I hope that people like myself will not feel like they have to prove themselves in some way before the can accept themselves and that one day, with the right education and teaching, being gay will be as normal as being straight in everyone’s eyes, especially their own.”

To climb Russia and Europe’s highest mountain will take Keith six days acclimatisation and he will have three summit days depending on the weather which can be extremely variable on the mountains.

Keith learnt his trade on other mountains around the world where the temperatures can drop as low as -30 and feel even colder if it’s windy. Other risks include acute mountain sickness, falling and avalanche.

Keith joked: “The biggest problem on the mountain is my hair getting messed up and not being able shave so I turn from being a cute twink into a bear in matter of days!”

Keith is taking the risks to raise as much money and awareness as he can for Stonewall and to show people no matter what your sexuality, you can fulfil your dreams whatever they are and never feel you are not as good as anyone else.

He concluded: “We are all different in our own brilliant way, Lesbian, Gay, Straight or Transgender !

To support Keith as he supports Stonewall, CLICK HERE: to donate.