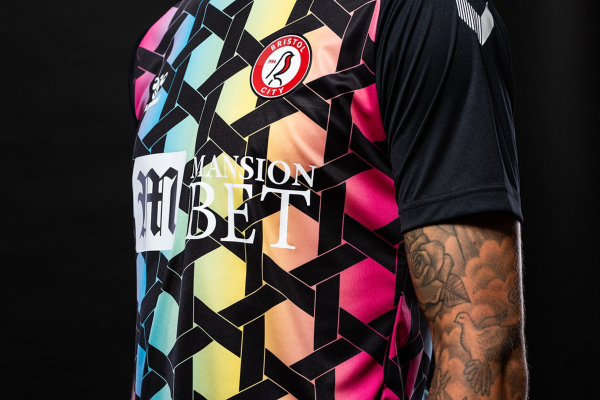 Bristol City football club have unveiled their new season goalkeeper jerseys and the rainbow designs have triggered some people. The club has teamed up with sports apparel company Hummel to produce the eye-catching designs. Announcing the release for the 2020/2021 season, the company said ‘both designs joyfully reflect the club’s recent trend for vibrant and eye-catching goalkeeper creations.’ Then social media took notice. “As a kit it looks dope af. but idk if it’s to support LGBTQ or nah. personally, I like watching football without these kind of society things and political stuff etc. just here to enjoy the beautiful game,” one Twitter user declared.

Others have supported the designs.“(The Club) have not even mentioned the kit being at all relevant to the LGBTQ+ community and this isn’t even the rainbow flag. If you dislike the shirts for their design that’s fine, but all of this homophobia is actually appalling,” another tweet said. “Crazy that, even in this day and age, some people are so insecure in their own sexuality or so scared of the sexuality of others, that they think the colour pink or a sort of rainbow pattern, is offensive or is going to make people gay. Truly bizarre.” reflected another tweet.

Highlighting the multiplicity of loyalties at play, Ryan Richardson tweeted “They think the colours are linked to gay pride Rainbow. I sort of see the resemblance but it doesn’t bother me at all since I support both gay pride and BCFC.”

The shirts represent a technical innovation as they take advantage of Hummel’s ZEROH20 dry-dye technology, meaning it is more sustainable than ever to produce the kit. Hummel reports that it normally takes 25 litres of fresh clean water to dye just one single t-shirt. Every two years it takes the entire volume of the Mediterranean Sea to colour the world’s textiles. However, the ground-breaking technology ensures there is zero water consumption, zero wastewater and a 50% reduction in energy consumption during the production process.

Bristol City finished 12th in the Championship league. The shirts are available to pre-order on the club`s website

Although referred to as the beautiful game, football has an ugly undercurrent of prejudice. Racism, homophobia and misogyny are often present in the abuse hurled at rival team players and supporters. Campaigns endorsed by the game`s ruling body the Football Association (FA) to combat those prejudices have included Rainbow Laces for LGBTQ+ inclusion and Kick It Out against racism.