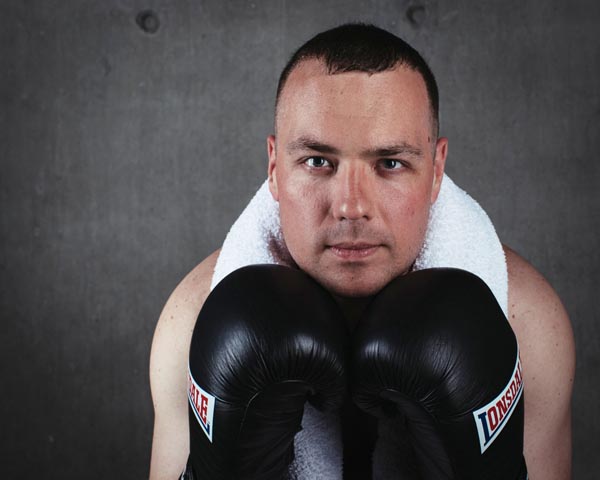 Craig Hanlon-Smith caught up with two newbie boxers to discuss the benefits and pitfalls of this seemingly feisty sport – Anthony, who is originally from the North East but now lives in Cardiff, and Sue from Essex, who lives in Folkestone and works in London.

Clichéd anecdotes still abound of a gay man’s disinterest in all sports but loving a ‘kit night’ and of lesbians dominating the hockey field or netball court. LGBT+ communities are filled with invitations to engage in a wide range of team sports and exercise clubs, but these often rotate around opportunities to participate in mainframe sport and more automatic and accessible choices; rugby, football and running clubs. However, in recent years there has been an emerging interest in perhaps the less obvious, including boxing.

Sue: “I always loved boxing as a kid – Frank Bruno, Mike Tyson, Nigel Benn, Chris Eubank, all successful female lesbian boxers,” she laughs, she laughs a lot. “Tyson and Bruno were the main ones. I always had a distant interest in it and from about aged eight to 18, I did Ju Jitsu but would have loved to have had a go boxing if it had been available, school sports were very narrow then.”

I asked Sue, who is 43 and was at school from 1986 to 1991, if school sports were influential in her choices.  “Of course!” (she laughs), “Look I know it’s a cliché but as an overweight lesbian kid, it was the shot-put or nothing! I loved it though, because they didn’t do it on site and so I used to get a day off school for lobbing a shot three times in the Essex County playing fields. It was ace.”

Sue became involved in boxing through the organisation Pride Boxing which has just run its second 10-week training programme and fight night event in the run up to Pride in London. Set up by head coach Jon Durrant, its aim is for boxing (White Collar Boxing) to appeal to everyone. Pride Boxing in particular is designed to create an environment where members of the LGBT+ communities can participate without feeling embarrassed or responsive to any form of stigma, the same group also run Industry Boxing for women only, and the Big Fight UK.

Sue: “It’s been a vertical learning curve trying to learn new skills and a bit like Strictly Come Dancing, there’s a lot of footwork. Getting used to being hit in the face has been interesting, especially when your natural reaction is to burst into tears. So far I’ve only had a fat lip but there’s more to it such as the adrenaline of sparring – concentrating more on being able to hit them!”

Has there been a social aspect to learning to box? “Yes, but you go there and train. You do chat to people, and it can be a bonding experience, but there’s not a lot of social chat. I mean you have a gum shield in and so just grunt a lot!” She laughs.

Anthony, aged 31, took up boxing in January of this year. “There is a boxing interest in the family, my brother does kick boxing, and my dad, for want of a better word, was a street fighter. Although I was interested in the sport at university in Newcastle I elected not to. I came out at the same time and discovered gay culture and what I knew then to be the gay world and was concerned with how I fitted in with that. We’re talking 10 to 12 years ago and whilst there were other opportunities I didn’t see boxing or martial arts at that time as an option.

“Ultimately I felt as though I didn’t really fit in to the Newcastle gay scene, around the gay people and the culture I felt as though I wasn’t being myself. It wasn’t until much later when I realised I can be whatever I want to be and whoever I am I don’t have to fit into that so…

So what specifically about boxing has appealed to you?

Anthony: “There’s fitness and health, both physical and mental, and my diet has changed, it’s much healthier and feels better. The sport has made me a lot calmer as a person and in a way given me a place to vent. It’s reduced my anxiety and my head feels much clearer. My confidence is through the roof both in myself and as an athlete – but also confidence in being a gay man. Before boxing I’d be scared of certain kinds of people, or of public displays of affection, that has changed.”

How would you describe those changes? “Friends have noticed that I exude a lot more confidence and the way I physically hold myself. In the past I’d go along with what was being said – now I’ll challenge an opinion. I think that as a gay man I viewed myself as a second class man to straight men, I’d move out of their way a little scared of them. I also think that by spending more time with them in this context I understand straight men better too. They’re no different to me and my friends – the only difference is our sexualities.”

Like Sue, Anthony has been following a 10-week White Collar Boxing programme and when we first spoke was working towards his first fight. Unlike Sue he is not a member of an LGBT+ sports club, his boxing programme is largely populated with ‘straight’ participants.

Are your fellow boxers aware that you’re gay and have there been any issues as a result?

Anthony: “In my experience people in boxing are more welcoming of your being gay than gay people are at my doing boxing. From gay men I’ve been met with ‘WTF why would you do that?’, or they just laugh or say ‘what are you straight now?’. I recently had a black eye, which is pretty usual when training, and I explained to someone that it was from boxing and his response was ‘Oh I thought you were gay’. Boxing is the most inclusive sport I’ve competed in so far. No-one seems to care who you are, it’s what you can do in the sport.”

I catch up with Anthony one more time just after his first fight. Although he went the distance he didn’t win this time.

How does that feel?

Anthony: “I’ll admit I was upset, I now understand why football fans cry when their team loses. That said, I’ve grown so much through it. I never thought initially that as a gay man I could do this – that feeling is now long behind me. I competed and that’s that. I’m looking forward to the next time.”