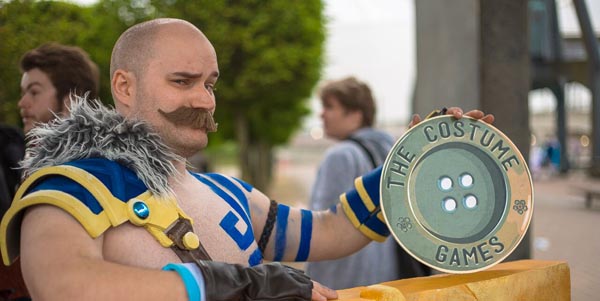 The Costume Games are the brainchild of MOSHIMO, Brighton’s popular Japanese restaurant, and will be taking place over five days (September 16 – 20), leading up to a weekend Costume Carnival which will be part of the opening weekend of the Rugby World Cup celebrations.

The games will be something genuinely different: people are being invited to Brighton to dress up and play over five days in September – and they will be helped to do so by a group of professionals behind some of the most enduring and iconic characters of the big screen.

Graham Churchyard, the costume special effects supervisor of Chris Nolan’s Batman trilogy and Marvel movies such as Avengers Assemble and Guardians of the Galaxy, has pulled together an extraordinary team that would only normally be found on the set of the biggest of Hollywood movies to help people dress up and get into character for The Costume Games.

Nicholas Röhl, co-owner of MOSHIMO and Festival Director of The Costume Games, said; “Our ambition is to transform the city of Brighton into one big stage where people can act out their fantasies through costume – all with the help of the some of the world’s leading costume designers.”

“We want to recreate the feeling we all had as children on discovering a dressing up box… we want to reignite the joy of getting into character – of becoming someone else, or someone you’d like to be, through costume.”

Academy Award winner Lindy Hemming (Topsy Turvy), Vin Burnham (Batman, The Fifth Element), and Day Murch (Batman, Star Wars), will be just some of the costume creatives joining Graham Churchyard for what is being dubbed Costume Clinics, which people will be able to attend to create and develop their individual costumes.

The Batsuit, worn by Christian Bale in The Dark Knight, will be displayed at the Brighton Museum from August 17.

The home for the Costume Games will be in the prestigious Old Steine Pleasure Gardens, where a number of themed events will take place over the five days:

Wednesday September 16: Brighton residents will be invited to join local set designers and artists for a “flashmob” arts project, transforming the Old Steine into The Costume Gardens. Lady Aiko, a leading Japanese street artist, will be on hand, creating art to set the scene for the evening’s Japanese theme, with a MOSHIMO supper club, live music by the self-styled “Godmother of Japanese electronica”, and screenings of Japanese anime films.

Thursday, September 17: Sees the Costume Gardens transformed into a Las Vegas Casino where people will be invited to dress up en masse as Elvis to raise funds for the Martlets Charity.

Friday, September 18: Will have a 1980’s theme with screenings of two iconic movies, Fame and Bill and Ted’s Excellent Adventure.

Saturday, September 19: Sees the Costume Gardens become base camp for the Costume Carnival – a hive of action where people will visit the Costume Clinic to prepare their costumes for “flash mob” performances and stunts taking place all over the city. A Costume Awards party – free for all in costume – is planned for the evening.

Sunday, September 20: Is Sing-a-long-Sunday! The Costume Gardens becomes the stage for ever more histrionic delights as both children and adults sing-a-long to screenings of Mary Poppins, Sound of Music… and – yes – Frozen. The day’s events will feature a hundred children playing in a Suzuki violin concert.

The Costume Games is being produced by Brighton Japan, a festival owned by MOSHIMO. It was inspired by the festival’s ever-growing popularity of Cosplay where people dress up as their favourite online and film characters, and has been created with the desire to extend the invitation to dress up and play to everyone who enjoys dressing up.