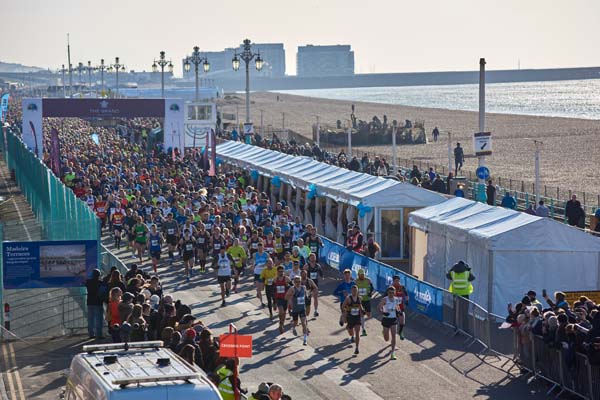 Runners take to the streets of Brighton to run The Grand Brighton Half Marathon 2018 in brisk temperatures under stunning clear blue skies.

Close to 8,000 runners turned out to run The Grand Brighton Half Marathon this morning, embracing the cold weather and running 13.1 miles.

The MP for Hove & Portslade Peter Kyle watched on as The Mayor of Brighton and Hove Councillor Mo Marsh sounded the starting klaxon to get the runners on their journey around the city.

Now in its 28th year, the race revealed new colours and branding for 2018, reflecting the colours and style of new headline sponsor The Grand Brighton.

Thousands of spectators lined the route to cheer on the runners, and crowds were entertained with music, bands and stilt walkers along the course, plus special ‘keep warm’ sessions hosted by PureGym.

In the main race, the field featured hundreds of runners new to the half marathon distance, plus experienced half marathoners and runners training for a full Spring marathon.

In the women’s race, local girls Izzy Coomber from Lewes AC stormed home in 79 minutes, Farnham Runners’ Sarah Bradbury took second place in 79:47 and Emily Proto from Arena 80 followed in a time of 81:27.

The Sussex Beacon Wheelchair Race also returned after its inaugural race in 2017, with four entrants from around the UK racing. Rob Smith took first place in a time of 69:10, while Gary Cooper came second in a time of 74:39.

Alongside the elite field, thousands of charity runners ran, to raise vital funds for over 35 charities, including local charities The Sussex Beacon, RISE Chestnut Tree House, and national charities including Alzheimer’s Society and Macmillan.

The race is organised by The Sussex Beacon, a Brighton-based charity which provides a range of services for men, women and families living with or affected by HIV across Sussex.

Race director Martin Harrigan, said: “The race was a fantastic success, with thousands of runners taking on the challenge of running 13.1 miles through the city and great crowd support along the route. It’s been absolutely brilliant to have a new headline sponsor for the race this year – The Grand Brighton – and it’s wonderful to have such an iconic Brighton brand be part of the event.

“We’d like to say a huge thank you to everyone who took part – the runners, our sponsors and charity partners and all the volunteers behind the scenes who make Brighton Half such an amazing community event.”

Andrew Mosley, general manager at The Grand Brighton, added:  “The Grand Brighton Half Marathon is such a fantastic event every year and it was brilliant to enjoy this year’s race as the headline sponsor. It’s always a joy to see our beloved Brighton community come together and raise funds that make a real difference to such a lot of people.  It was an absolute pleasure to work with The Sussex Beacon and all the race partners and we are all dedicated to developing the race throughout the next two years as headline sponsors. Well done to all that took part.”