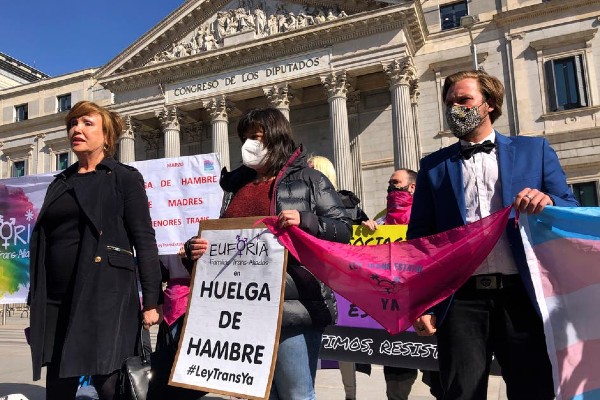 70 trans activists in Spain are on a hunger strike to demand the Congress of Deputies in Madrid pass the delayed gender recognition law immediately, in order to allow citizens to self-identify without medical diagnosis. The law was first proposed by government coalition partner, United We Can, but has not yet been taken to parliament. The activists have been striking since March 10, and aim to do so until the law is submitted. Mar Cambrollé, from Plataforma Trans, told ABC News: “They are not going to put locks on freedom.”

They continued: “We’re very clear about what we want. Self-determination with conditions on it isn’t self-determination.” Deputy prime minister, Carmen Calvo, expressed concern over the new law, saying it could “undermine the rights” of women, but insisted it would be taken to parliament soon. Calvo also suggested a new law which would improve protections for all LGBTQ+ people, but Cambrollé said this could make trans people “invisible” once again by ignoring the specific needs of the trans community.

Prime minister Pedro Sánchez has also been accused of blocking the new law alongside Calvo. However, the bill was sponsored by equality minister, Irene Montero, who wants to remove the need for medical or legal permission before trans people can change their names and gender markers. Cambrollé said the activists will continue to demand justice for trans people, tweeting: “We continue in the fight and we will use all our body’s energy as a force for resistance. As we have always done! Until the end! Until we see the trans law go to congress!”