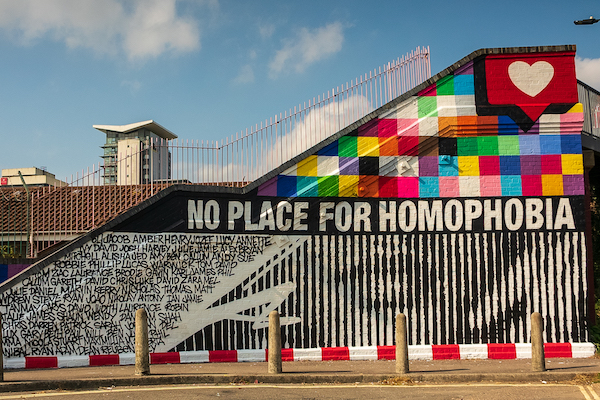 A striking mural has been created in Southampton to celebrate the response to the No Place for Homophobia in Southampton campaign, which was launched by Southampton Football Club and its official kit supporter hummel earlier this month.

The mural design includes the campaign manifesto, the LGBTQ+ colours and thousands of pledged names, alongside the city’s LGBTQ+ population and the men’s and women’s first team players.

Sarah Batters, Southampton’s director of marketing and partnerships, said: “We’re proud to be standing alongside our fans and hummel by making a powerful statement in the city to show our support for LGBTQ+ supporters.

“We want to make sure that football is an inclusive environment for all and thank our fans, players and Southampton for their pledge of support that helped create this important mural for the world to see.”

Earlier this season, Saints collaborated with hummel on a specially designed warm-up shirt worn ahead of the match against Everton – the shirts have been auctioned off with proceeds going towards Saints Foundation, which provides LGBTQ+ awareness classes in local schools.

Fans can continue to show their support for the campaign by picking up a ‘No place for homophobia in Southampton’ T-shirt, which is on sale for £22 with £10 from every t-shirt sold will be donated to the Saints Foundation.