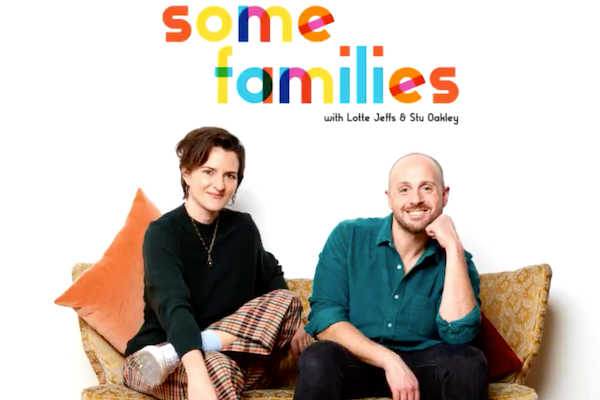 Some Families, the podcast that celebrates LGBTQ+ parenting, returns on Monday, February 22, 2021 for a second series full of stories of parenting diversity from the queer community. The podcast, which launched last year as the first ever to focus on LGBTQ+ parenting, is a one stop shop for anyone curious about queer parenting.
Available to listen, via Apple Podcasts, Spotify or via all good podcasting platforms, Some Families shares funny, emotional, and true stories from the LGBTQ+ community and is hosted by lesbian mum, editor, author and journalist Lotte Jeffs and gay dad and entertainment publicist Stu Oakley.

This series Lotte and Stu delve into topics such as BAME and trans-racial adoption, being an asexual parent, post-adoption depression, the fight for IVF equality for same sex couples, trans-parenting rights, queer representation in children’s books and parenting a transgender child. The series also includes stories of IUI/IVF insemination (including the couple who both gave birth on the same day!), surrogacy and adoption plus general day to day parenting issues all looked at through an LGBTQ+ lens.
The first series, called “warm, funny and insightful” by The Times, featured a plethora of guests including Academy Award winner Dustin Lance Black, trans parents Jake and Hannah Graf, actor Charlie Condou, comedian Jen Brister, author Riyadh Khalaf and drag dad and RuPaul’s Drag Race star Mrs Kasha Davis.