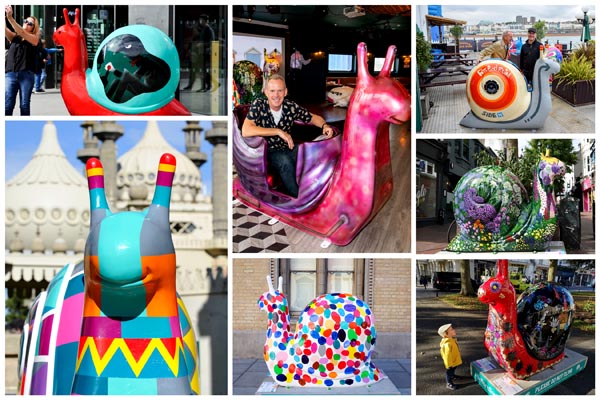 The final event of Snailspace Brighton and Hove sees the auction of fifty works of art by over 40 different artists, with hundreds of bidders and two hours of nail-biting excitement both in the room and online.

THE auction will take place at Hilton Brighton Metropole on Monday, December 3 from 7.30pm – 10pm. The event will be live-streamed on Facebook for everyone to watch and bids will be taken both at the event and online.

All proceeds from the auction will go to Martlets, to help fund life-changing hospice care in Brighton & Hove and neighbouring areas.

For information on how to purchase a ticket to attend and how to bid for a lot, click here:

Snails are rarely a welcome addition to a garden, however there is perhaps one snail that will grace your garden with style, without eating a single thing.

Monday, December 3 is your chance to acquire a unique, artist designed, snail sculpture, when each of the fifty giant snails that have been part of Snailspace, the world’s leading sculpture trail featuring ginormous gastropods, go under the hammer at the Metropole Hotel on Brighton’s iconic seafront.

Go along and bid on your favourite gastropod!

Each of these mighty molluscs is a unique artwork, created by an eclectic mix of artists. Some of the snails have been sponsored and the artwork commissioned by Snailspace celebrities, from ‘Sanderson’, a seaside sandcastle snail conceived by YouTuber Alfie Deyes, to a snail designed as a police pursuit vehicle called, ‘Nee Nor’, imagined by best-selling crime novelist, Peter James. The snails have been on display around Brighton & Hove for the past nine weeks in aid of local hospice, Martlets, and all proceeds from the auction will go towards patient care.

The Snailspace Auction is a rare opportunity to own a one off piece of art from some amazing artists. From emerging artists, like Danni Smith, with her stunning floral love letter to Bees (‘To Everything There is a Season’), to Turner Prize nominated artist, David Shrigley, who’s snail, ‘Slimon’, showcases his crude, tongue in cheek style and ironic sense of humour. Shrigley who’s received global acclaim for his diverse portfolio of work was also awarded the 2016 Fourth Plinth commission for London’s Trafalgar Square.

As the artwork was commissioned in Brighton, many of the city’s celebrated artists are represented.  From graphic artists, Art & Believe, who create diverse, thought-provoking installations on a global scale and whose snail ‘Inca’ was inspired by an intrepid trip to South America, to well known street artist, Cassette Lord. Commissioned by Norman Cook, AKA Fatboy Slim, Cassette Lord loves to bring the surreal into the everyday and is inspired by the 60’s pop art movement and references shapes and objects people recognise from their childhood. Unsurprisingly his snail celebrates an iconic music phenomenon, so all hail, ‘Fast Forward The Mix Tape Snail’. With its links to two celebrated artists it is likely to quickly become a collectors piece.

With its burgeoning reputation for gastronomy, Brighton based artist, Eelus has created a twist on the generally unhappy culinary role of snails. With his trademark style of spattered spray paint depicting dark characters alongside vivid bursts of colour, Eelus has taken inspiration from his love of books and the storytellers that fuelled his imagination as a child.  His Snail, ‘L’Escargot Fantasie’, is a riotous display of colour and portrays the renowned (and feared) French chef Jacques Le Méchant. This is one snail that is not going to end up in the chef’s pot, but would look fabulous in (or outside) any chef’s restaurant!

Talented illustrators have also created snails, including, Mister Phil’s, ‘Life in The Slow Lane’, an intriguing and intricate artwork which encourages close inspection and genuinely encourages viewers to slow down to appreciate all that’s hidden in the design.

Guy Parker-Rees, who’s wonderful illustrations for best-selling picture book, ‘Giraffes Can’t Dance’ have been gracing children’s bookshelves for 20 years, has created a snail of the same name. Brighton itself has also been the inspiration for many artists, such as ‘Arthur’ created by Martha Mitchell, which features hand-drawn, detailed fine-line images of famous icons and places that are unique and instantly recognisable.

Another snail likely to be extremely sought after is ‘Soraya’ by Sarah Arnett. Taking inspiration from the pleasure gardens of 18th century, Soraya’s intricate design depicts an array of plants, follies, ponds and half-hidden wonders. Former fashion designer, Sarah Armett was the artist behind the highest selling Snowdog from the Martlets 2016 Snowdogs by the Sea event in partnership with Wild in Art. ‘Max’ sold for £22,000 and all eyes will be on the auction to see if Soraya can match or even exceed it.

Other fabulous and utterly unusual snails that would look amazing either inside or out are ‘Fabtastic’ and ‘Scoopalicious’, snails fashioned into iconic ice-lollies, which create a sense of nostalgia for the typical British seaside experience. Or, who wouldn’t want to own ‘I Ain’t No Slug’ a snail that looks like a funfair dogem, comes complete with a steering wheel, and can be sat in by kids of all ages.

However, if your wallet won’t quite stretch to one of the giant snails, or perhaps you only have a postage stamp-sized backyard, then there is a limited edition miniature version of ‘Feelin Groovy’, created by artist Pinky which is on sale via the Martlets online shop (https://www.themartlets.org.uk/shop/feelin-groovy).

Snailspace, with its accompanying campaign motto, #BeMoreSnail, is a concept that Wild in Art plan to take to cities around the world as part of their work producing spectacular, mass-appeal public art events that make a difference to communities.

As the debut Snailspace sculptures, the snails exhibited this autumn around Brighton & Hove – are expected to command a premium at auction.

The Snailspace Auction on Monday, December 3 is a ticketed event. To register interest email your details to snailspaceauction@martlets.org.uk  or call a member of the Martlets Snailspace team on 01273 747455 or visit Snailspace auction page (https://www.snailspacebrighton.co.uk/snailspace-auction/).  Bidding is possible online but potential bidders also need to register ahead of the event on 3rd December.  The auction will also be streamed live on Snailspace Facebook page @snailspacebh.