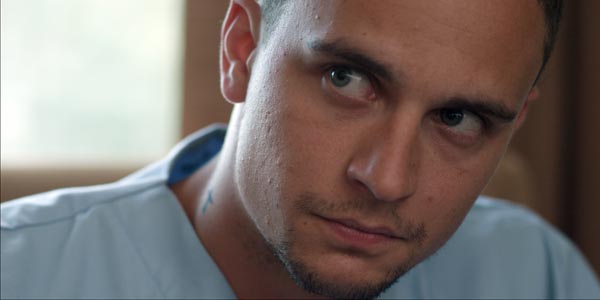 A short film written and directed by Dr Christine Templeton-Parker, a Lecturer at the University of Derby, has won five prestigious Awards of Excellence at the international Best Shorts Competition.

The Carer, which was commissioned by QUAD in Derby for its Shine a Light series of short films and funded by the Esmée Fairbairn Arts Foundation, was awarded the gongs at a ceremony in Los Angeles earlier this month.

Writer and Director Christine Templeton-Parker, who will lead a new MA in Writing for Performance at the University of Derby this year, said: “I’m thrilled to have won these awards and I’m particularly pleased for Seen ‘Ya Rights – the real life Derby-based campaigners for dignity in elderly care who inspired my story.

“The Carer is about what happens when an elderly gay man feels pressured to return to the closet in his dying days. It’s a story for everyone, about finding a way to retain your identity and dignity at a time of crisis.”

Lead actor Peter Eyre added: “I was working in New York in the theatre when Christine sent me the script of The Carer. I was very struck by the originality of the theme. There aren’t many films made about elderly people, and certainly very few films, or none about elderly homosexual men.

“What I really loved about the script was the delicacy of the story telling, and a kind of poetic element which made it subtle and touching, not preachy or journalistic.”

The Best Shorts Competition recognises film, television, videography and new media professionals who demonstrate exceptional achievement in craft and creativity, and those who produce standout entertainment or contribute to profound social change. Entries are privately judged by highly qualified professionals in the film and television industry.

In winning these awards, The Carer joins the ranks of other high-profile winners of this internationally respected accolade including The Weinstein Company for Market Hours, Disney Interactive for Vinlymation: A Love Story and Oscar-winning production Mr. Hublot from Laurent Witz from Luxembourg.

John Whall, Digital Participation Curator at QUAD, added: “These accolades go to show how dedicated Christine is to telling a story with real merit, inspired by the passions of real people from Derby. It has been fantastic to have Christine work on the Shine a Light series and we couldn’t have found a better fit to work with project group Seen ‘Ya Rights.”

The new MA in Writing for Performance will prepare students for a sustainable career in writing across film, theatre, radio and television.