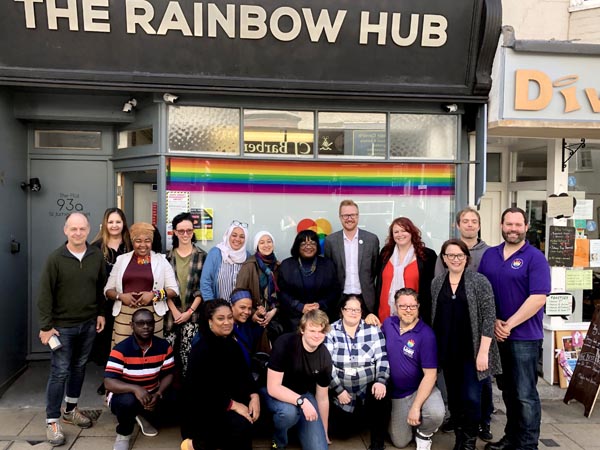 Lloyd Russell-Moyle, the MP for Brighton Kemptown & Peacehaven accompanied Ms Abbott, the MP for Hackney North and Stoke Newington since 1987 to the meeting.

Ms Abbott heard from Billie Lewis, the volunteer elected Chair of the LGBT Community Safety Forum, about community concerns regarding recent violent attacks on LGBT+ people in St James Street and the reluctance of some people to report both Hate Crime and violent attacks to the police because they “feel nothing will be done”.

Representatives from the BAME and Jewish Communities other minority were present and speakers from the International Women’s Network, and the migrant group, Voices in Exile, the Brighton Table Tennis Club, and the City of Sanctuary, all engaged in an open and frank round table discussion with the Shadow Home Secretary.

“In Brighton and Hove we’ve seen a 108% increase in violent crime since 2011. In the first quarter of this year we’ve had more than 5,739 incidents of violence recorded – an increase of 6% since the previous year.

“Recently there has also been a worrying trend of attacks in the Kemptown area around our LGBT+ venues.

“I asked Diane Abbott to come to the The Rainbow Hub to hear directly about our concerns and what we’d like to see from a Labour government.”

He continued: “Austerity has placed an incredible burden on our city which we are seeing take effect with the statistics.”

Ms Abbot acknowledged there had been a national rise in hate crime including in the LGBT+ communities.

She said: “People know the police have done a lot to counter this but a lot of people are not reporting hate crimes and the level of hate crime is higher than police know.”

She added that the Labour party were “very keen to reach out to all minority communities and work with them” to encourage the reporting of hate crime.

During the meeting Ms Abbott met and spoke with members from minority communities in Brighton including people who volunteer at The Rainbow Hub and representatives of refuge groups.

Billie Lewis, elected volunteer chair of the Brighton and Hove LGBT Community Safety Forum, said: “Hate and violent crime affects us all, albeit in different ways. From our point of view it was good to talk to other minority groups within the city.

“By joining together you have more people with shared experiences.

“I am particularly  delighted that volunteers from the Jewish and BAME communities have signed up to volunteer for the new Community Guardian Volunteers project.”