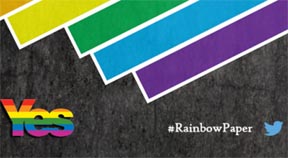 The campaign group say Westminster control is holding back LGBT rights and threatens to reverse the progress achieved.

The group has published a Rainbow Paper outlining seven ways in which independence will help secure greater equality for LGBT people, including enshrining LGBT equality in a written constitution, securing the power to protect and improve equality law, securing the power to protect spending on LGBT equality measures in public services, the chance to create a compassionate asylum system that offers protection to those facing persecution, and full control over foreign policy and international development enabling Scotland to actively promote LGBT rights around the world as part of a progressive Scottish foreign policy agenda.

The organisation argues that the demonstrable benefits of independence for LGBT people in Scotland are in stark contrast to the threats posed to equality under Westminster control, including the lack of constitutional protections and Tory plans to scrap the Human Rights Act, water down the Equality Act and continue cutting Scotland’s block grant.

Kirsty MacAlpine, Co-convener of Yes LGBT, said: “Independence offers Scotland a unique opportunity to secure the powers and resources we need to ensure full equality for LGBT people here and to play our role in promoting human rights around the world.

“Over the past 15 years of the Scottish Parliament, Scotland has consistently taken a more progressive approach to LGBT equality than Westminster, with world-leading laws and leadership in the areas where we have control. With the Tory-led UK Government now planning to repeal the Human Rights Act and cut Scotland’s block grant it is only with independence that we can protect and continue progress towards the fair and equal Scotland we all want to see.”

Patrick Harvie MSP, the openly bisexual Co-convenor of the Scottish Green Party, said: “Holyrood is a Parliament which has never once voted against any aspect of LGBT equality, and that’s not something that can be said of Westminster. There are many opportunities which independence offers, from a humane asylum system to constitutional protection for all citizens’ equality. We have nothing to fear from independence, and much to gain.”

“Scotland has changed. Once a country which held out for years against decriminalisation of male same-sex relationships, we are now a country which gave equal marriage the third biggest majority of any country in the world. We should be proud of that progress, and unafraid of taking responsibility for all the decisions about our country’s future.”

The Scottish Parliament currently has control over some, but not all, areas affecting LGBT equality. It has powers over areas including justice, family law, education and health and can decide how it spends its block grant from the UK government. It does not have control over constitutional issues, equality law, foreign affairs, asylum policy, or the size of the block grant it gets, all of which remain reserved powers of the UK Parliament.

The Rainbow Paper highlights the need for control over equality law so that Scotland can protect the progress that has been made on LGBT equality in recent years and address outstanding deficiencies that the Westminster Parliament has been unwilling to act upon, such as protection from discrimination for all transgender and intersex people, equal pensions provision for same-sex couples, and ensuring that sexual orientation is counted as a characteristic protected from harassment.

On asylum, the paper highlights the degrading way in which the UK Government currently treats LGBT asylum seekers and argues that independence would enable Scotland to create a compassionate system – in line with Scotland’s political consensus – that would ensure all asylum seekers are treated with dignity and respect. Recently the Court of Session has had to intervene to stop the UK deporting people who are at risk of being seriously harmed because of their sexual orientation back to their countries of origin.

On foreign affairs the paper argues that Scotland has a strong record on promoting LGBT equality internationally, particularly during the Commonwealth Games, where the Scottish Government funded the first ever Commonwealth Games LGBT Pride House, flew the rainbow flag from government buildings and proudly spoke up for LGBT rights both in public statements and in bilateral meetings with foreign governments.

Stewart McDonald, Co-Convener of Yes LGBT, said: “This paper leaves no doubt that our campaign is at the heart of the progressive Yes movement. All we’re getting from No, however, are threats to scrap the Human Rights Act but we need more answers. What will Westminster do to reform the asylum system? What is being done to promote LGBT equality abroad when 42 Commonwealth countries still criminalise gay relationships?”