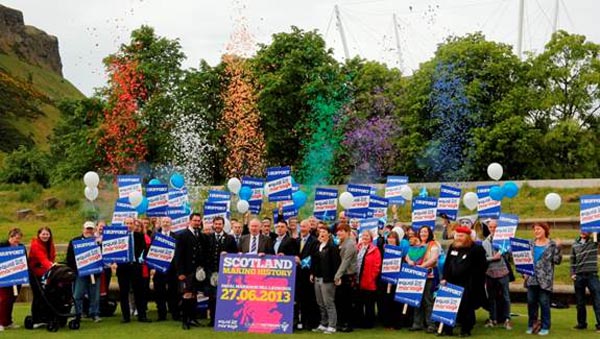 The Equality Network, Scotland’s national lesbian, gay, bisexual and transgender (LGBT) equality charity, have welcomed the introduction of the bill.

This morning equality campaigners are gathing outside the Scottish Parliament to welcome the introduction of the bill and to celebrate the fifth anniversary of the Equality Network’s Equal Marriage campaign. They will be joined by same-sex couples hoping to get married when the law is changed, religious ministers hoping to marry them, and a cross-party selection of MSPs who support a change in the law to allow same-sex marriage.

“After many years of campaigning for equal marriage we are delighted that the bill has today started its journey into law.  We hope that our MSPs will stand by the values of equality and social justice that the Scottish Parliament was founded on and vote to pass this bill with the strong majority it deserves. Thirty-three years ago Scotland finally decriminalised homosexuality, today the large majority of Scots agree that it’s time LGBT people were granted full equality under the law. By passing equal marriage legislation our MSPs will not only be giving same-sex couples an equal right to celebrate their love through marriage, they will also be sending out a message to the world about the kind of fair and progressive country Scotland wants to be.”

A Scottish Government consultation on the draft Marriage and Civil Partnership (Scotland) bill closed in March. It is believed that around three quarters of responses backed the introduced of same-sex marriage and mixed-sex civil partnership in Scotland.

The video has proved a major hit already having over 35,000 unique views in just three days. The campaign features leading Scottish celebrities, the First Minister and leaders of the opposition parties, religious ministers, and ordinary couples from across the country, all voicing their support for equal marriage and declaring that in 2013  It’s Time LGBT people in Scotland had equal rights.

Opinion polls have shown consistent public support for same-sex marriage across Scotland. The most recent poll was conducted in June 2012 by Ipsos MORI on behalf of the Equality Network. It showed record support with 64% of Scots in favour of same-sex marriage, and just 26% opposed. Separate polls conducted over the past three years by Populus, YouGov, Angus Reid, and the Scottish Social Attitudes Survey, have all shown similar levels of support.

Support for equal marriage is also high in the Scottish Parliament. Over two-thirds of MSPs have now signed the Equality Network’s ‘Equal Marriage Pledge’ committing themselves to voting in favour of same-sex marriage. Signatories include First Minister Alex Salmond, all Cabinet Ministers, and the leaders of all four Parliamentary opposition parties. Whilst 89 MSPs have now said they will vote in favour, just 11 remain publicly opposed.

Most countries around Scotland already have same-sex marriage, including Iceland, Norway, Sweden, the Netherlands, Denmark, Belgium, France, Spain and Portugal. The UK Government are currently in the process of introducing same-sex marriage in England and Wales, whilst Ireland is considering a change in the law to allow it.

Across the Atlantic, Canada already has same-sex marriage as do many US States. In a landmark ruling made yesterday the Supreme Court of the United States struck down the Defence of Marriage Act (DOMA), which denied federal benefits to gay couples, and reintroduced same-sex marriage to California by declining to rule on Proposition 8.